Design Miami 2017 is here, with 34 galleries from 14 showing their wares through in a large white structure behind the Miami Beach Convention Center, home to older-brother fair Art Basel in Miami Beach.

Ted Loos talked to some of the people on hand at the first day of the fair and those who shape what’s on view. 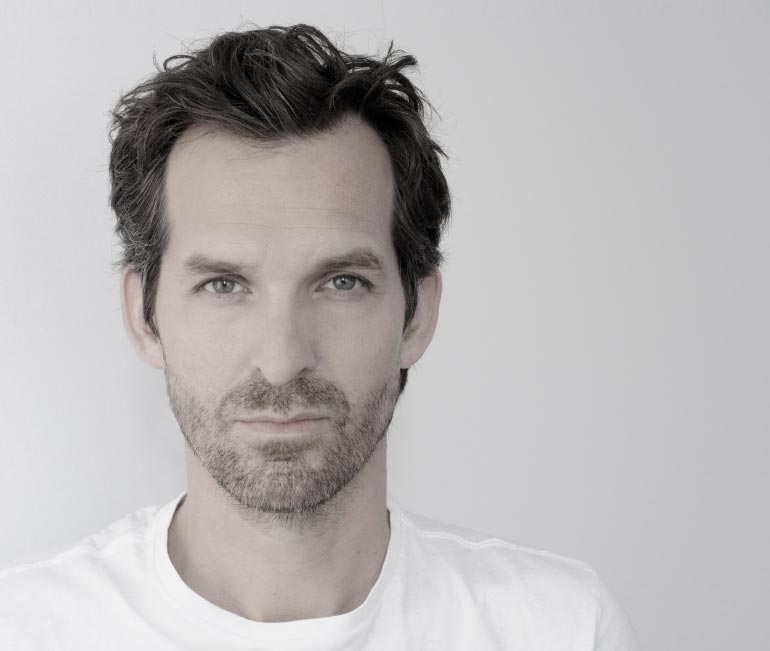 Interior Design: How is the series made?

Mathieu Lehanneur: Using specialized 3-D software in liquid effect, my team and I reproduced the complex geometry of moving water. The objective was to freeze the movements of the water in the stone. The machines takes several weeks to make a piece, and then begins a long polishing job to make the marble as reflective as the ocean.

ID: Why is the ocean inspirational?

ML: We live on a planet where water covers 75 percent of the surface. The ocean is our origin, and water is our main physiological component. Yet, it is the element that remains the most enigmatic to our civilization. In fact, scientists have a better understanding of the moon’s surface than of the ocean’s seabed. Ocean Memories feeds on all of this: The polished black marble implies relief and deepness, while the bronze is reminiscent of the sun’s warm glow.

ID: What do collectors of your work say about owning the pieces?

ML: When I explain to collectors that the Ocean Memories pieces are fully functional as tables, benches, or side tables, they usually say ‘I don’t care, I love them as art pieces.’ But they come back later telling me that they love the functionality.

ID: Who is another furniture maker working today that you respect and admire, and why?

ML: I love the work of Jorge Pardo. He’s a Cuban artist who works with design as main component of his art pieces. In his way, as in mine, the target is not only to make beautiful furniture but to make art.

ID: Why didn’t you make it down to Miami Beach—what are you doing instead?

ML: I am preparing a solo exhibition at Christie’s, Paris, next January, that will address the same approach but played in a different way. For the moment, let’s keep it a surprise.

Dealers Suzanne Demisch and Stephane Danant are anchor tenants of Design Miami, having been with the fair since its inception in 2005, specializing in French design from the 1960’s until the present. They answered a few questions as the first collectors came through the door to look at their pieces by Maria Pergay and others.

ID: What changes have you seen in the 13 years of the fair?

Suzanne Demisch: Design Miami set the pace for the new design market—there wasn’t a market in the same way. More collectors, more interest, more dealers. We weren’t called galleries at the time, even though he did that work. The fair framed the conversation.

Stephane Danant: Contemporary design has exploded. There’s a whole area I like to call contemporary decorative arts, more than design. It’s a blurry area between art and design.

ID: What other galleries showing here have your respect?

Stephane: I am really interested in Jason Jacques Gallery of New York and his ceramics. Ceramics are huge right now.

Suzanne: Ceramics are a perfect collectible, an object you can bring home. You can collect an artist, or a series. They have great characteristics.

ID: What are you showing that’s extra special?

New York-based architect Annabelle Selldorf is at the forefront of museum and gallery design, among other areas, as seen in her work for New York’s Neue Galerie; her work on galleries for David Zwirner and Hauser & Wirth; and upcoming projects for New York’s Frick Collection and the new Museum of Contemporary Art San Diego. Her school building in Mwabwindo, Zambia, for 200 students won the 2017 Panerai Design Miami/ Visionary Award. The Interior Design Hall of Fame member chatted fresh from a panel discussion about the African project.

ID: Tell me about this school.

Annabelle Selldorf: The built reality is going to be very nice. There’s a big shade tent made of steel. That’s easily attainable from the main city a couple of hours away. There’s a corrugated roof. The classroom and clinic is built in local mud brick—but it’s not like there’s a brick factory around there. We purchased a brick-making machine and studied how to do this. And you can use local labor and then they have a new skill.

AS: It’s obviously a very good idea to help build schools where there aren’t any. My greatest hope is that this idea to help people catches on. We need it here too. We’re hard up for education. I took the idea back to the office and I sent an email to the entire office saying: ‘We’re going to do this pro bono. And anybody who wants to work on it, come forward.’ Of 65 people, 58 people replied, ‘What can I do?’ Everybody put in some ideas.

AS: Doing things like this makes us grounded. Many architects, famous and not, are doing this. It says something about who we are in the profession.

AS: It’s a very industrial building and space. They will be able to make exhibitions and use space in ways they haven’t been able to in their current space in Wynwood. There’s a big garden in the middle. It’s slightly larger space. It’s all about the flow, circulation, and rhythm. I wanted it to be more user-friendly and to reflect how dynamic they are—they show tough art. So it’s making spaces where people can take time with the works.