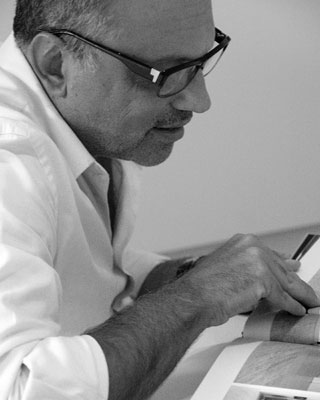 The world may think of it as the lighthearted land of Carnaval, samba, and the Girl From Ipanema, but Brazil has a serious side, too. Especially when it comes to architecture and design. Besides having the world’s most hard-core modernist capital-utopian Brasília, designed by Oscar Niemeyer in collaboration with architect and urban planner Lúcio Costa and landscape architect Roberto Burle Marx-Brazil produces some of the most sensuous furniture this side of Vladimir Kagan.

has continued to build on that impressive design heritage. Based in a huge, sunlit studio in São Paulo, the prolific architect has shaped some of the city’s most fashionable addresses. He’s completed minimalist boutiques for Reinaldo Lourenço and Alexandre Herchcovitch as well as sleek furniture showrooms and stylish hospitality environments for a variety of clients.

His bright and cheerful Cantaloup restaurant features appropriately melon-colored dining chairs, while Kosushi is a moody composition of Japanese-inspired woodwork, lightened by chairs of transparent orange acrylic. “People like to be entertained when they go out,” says the architect. And his designs are certain to keep them on their toes.

Most spectacular is his Hotel Emiliano. (There’s even a heliport atop the glass-enclosed top-floor spa.) Located in the exclusive enclave of Jardins, the subdued, glamorous hotel captures his love of scale: towering public spaces filled with a mix of cream-colored sofas and quirky string chairs by São Paulo’s own brothers

. “Guests should never feel tired there-and always feel as if they were at home,” Casas says.

Meanwhile, Casas has successfully exported his sophisticated South American style to New York, where he maintains a satellite office. At the Trump World Tower near the United Nations, his World Bar offers an appropriately gilded backdrop for the international set. On Fifth Avenue, he put a modernist spin on a prewar apartment, letting Danish mid-century chairs and a French commode from the 1930’s shine alongside refurbished classical details.

His own compact but stylish apartment in SoHo sticks exclusively to Brazilian furniture-except for a single Le Corbusier armchair. “The idea was to take a little bit of Brazilian culture abroad,” he says. Call him a design ambassador.

Casas is as versatile, however, as he is prolific. He works equally well with a pedigreed prewar in Manhattan and a modern beachfront penthouse in Rio de Janeiro, where he designed a dramatic indoor lap pool overlooking Guanabara Bay. In an apartment in São Paulo, Casas mixed Brazilian furniture with Alvar Aalto, Hans Wegner, and Serge Mouille classics culled from international dealers.

His versatility also makes itself evident in his many activities. You might find him on Brazil’s Casa Cor show-house circuit, where he’s a regular; presenting plans for high-rise luxury condos to developers in São Paulo; or putting the finishing touches on his upcoming Novorumo furniture line. Such industriousness lays the myth of Brazilian insouciance to rest-and puts Brazilian design in its rightful place on the world stage.