Axor Teams With Front and Nendo on WaterDream Shower

On first thought, the shower is a simple and straightforward utilitarian structure. But Philippe Grohe, head of

“Within our overall understanding of the use of space, the interaction with water, and the multifaceted individual needs of people, we focused specifically on the shower this time, interpreting it anew with

Both design groups created two installations that, on a visual level, could not be more different, but both succeed in re-imagining light and water in unconventional ways that blur the lines between living and bathing spaces. 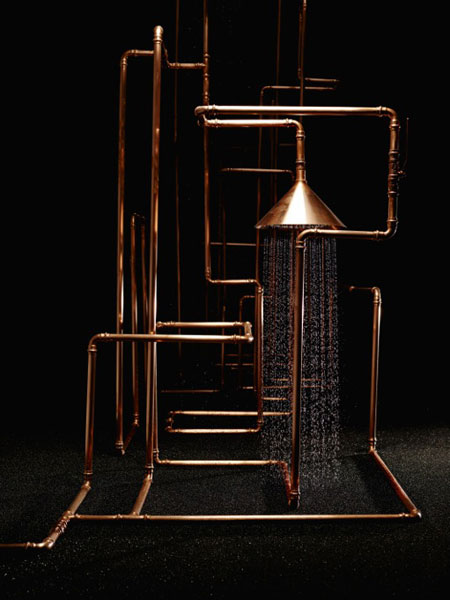 Designer Oki Sato of Nendo combined water and light, quite literally, with his interpretation. “My aim was to combine what is most archetypal about the living space, the lighting, with water, so as to give the shower an enhanced sensuous dimension in a way we have not yet seen before. The result is something that is not just a shower, nor just a lamp, but a hybrid—a magic trick with light and water that is available day after day,” says Sato.

Sofia Lagerkvist, Charlotte von der Lancken and Anna Lindgren of Front, on the other hand, played around with the shower’s components, exposing pipes, valves, couplings, and funnels. “We used our personal perception of the shower and showering to draw attention to the technology behind the wall, which is often concealed,” explains von der Lancken. “It was important for us to foster an awareness of what is the most archetypal aspect of the bathroom: the installation itself.”