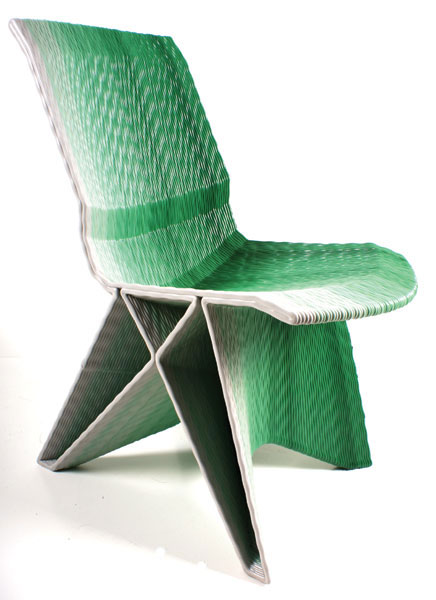 Prior to the mid-2000s, 3D printing technologies were used mainly in the industrial design industry to quickly visualize the functionality, usability, and aesthetic of objects and parts that were meant for production by more traditional means and in a different material. Called rapid prototyping, this remains a vital part of design today. Lach Tsvetanov, industrial design director at

, confirms that the 3-D printer he purchased eight years ago for their Manhattan studio—where 90 percent of their product development and prototyping occurs—is in constant use and that they’re due for a new one. Even though the 3-D printed parts that they create are not suited for the durability needed in industrial office furnishings due to the mechanical quality of the components, having the machine in the office is invaluable to the designers and engineers. It speeds up the development process, especially at the concept phase when they need to rapidly evaluate a design’s feasibility.

Fast forward to 2005 which stands as a landmark year in which the first entirely 3-D printed chairs,

, were created and marketed as finished products. Although it was a long while before 3-D printing stormed news headlines, the technology had already resonated throughout the design world, resulting in an explosion of creativity. From this point in time to the present is the period that the exhibition “Out of Hand: Materializing the Postdigital”, on view at New York’s


examines digital fabrication as an interdisciplinary, transnational trend in contemporary studio practice. Included are in the exhibition are 3-D printed works by artists, architects, and designers who achieve new levels of creative expression, reflecting the reciprocal relationship between art and innovation the past 8 years.

In lighting, Front Design’s freeform Materialized Sketch of a Chandelier (2005) represents a captured drawing made in the air, Dror Benshitrit’s geometric Volume.MGX lamp (2009) folds flat with 1200 articulated joints, and Dan van en Berg’s Merrick Lamp (2010) uses generative design to infect an IKEA lamp with the Elephantiasis virus that morphs its form with each new print. In small objects, Greg Lynn’s Flatware (2007) takes a 21st-century approach to the design of a set of utensils, based on formal dining as prescribed by mid-20th-century American etiquette books, while Nendo’s Lacquered Paper-Objects (2012), made of 3D printed paper and finished with Japanese urushi lacquer, puts a contemporary twist on a centuries-old tradition.

is brightly polychromed, and Anish Kapoor’s

(2008) proposes a 3-D printed solution to the encroachment of the Sahara Desert, using bacteria that solidifies sand into sandstone structures, and Behrokh Koshnevis’

(2012) provides multiple solutions for 3-D printed houses both on this planet and beyond.

What Exactly is 3-D Printing?

How Will 3-D Printing Impact the Future of Design?