It all started indoors, at an art fair. To furnish a coffee bar at New York’s Armory Show, architecture firm

found chairs on the city’s streets and refurbished them by sending them to a taxi-repair shop, where they were baked with a coat of cab-yellow automotive paint—fulfilling a programmatic need, tying the project to place, and keeping the planet in mind, to boot. The yellow chairs caught the eye of Sherry Dobbin, the

’s director of public art, and the result of the encounter was

displayed on a pedestrian plaza during

. For three consecutive mornings, Bade Stageberg Cox placed 49 chairs, some from the Armory Show and some newly found, in a seven-by-seven grid, mirroring the seating arrangement in the nearby theaters. “The scenario explored how the chairs would be used by the public to activate the plaza,” principal Jane Stageberg says. Installation art morphs into performance art. 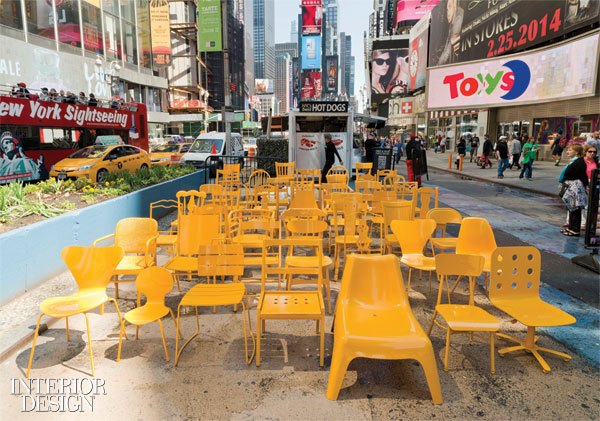 For NYC x Design, Bade Stageberg Cox found 49 chairs on the street, sent them to a taxi-repair shop to be painted, and arranged them in Times Square. Photography by Adrian Wilson.