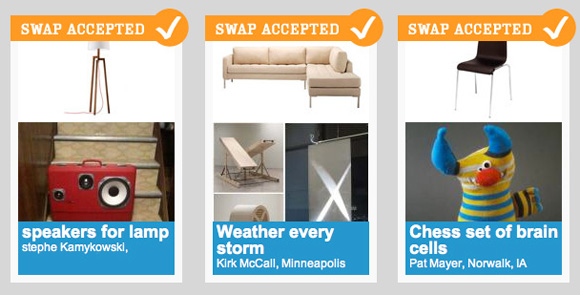 Five pounds of gooey chocolate. A tattoo of a company’s logo. Letter press stationary made on a 100-year-old press. These are just a few of the items design lovers across the nation are willing to donate in exchange for brand new modern furniture by Minneapolis-based

. The auctions are part of its second-annual

. The manufacturer began the swap meet in 2011 based on its background in bartering (quick background note: When the company was founded in 1997 by three college buddies, they exchanged a custom-built tree house for a logo design). Last year’s event proved so popular that Blu Dot has brought it back. The idea is simple: A&D lovers put up for auction what they want in exchange for a piece of furniture. The items can be zany, artistic, or downright head-scratching as proven by some of last’s years winners: a secret handshake, a Popsicle stick motorcycle, and a collection of sporks. During the live auction period, bidders can post their offerings on Blu Dot’s website and the firm will review and select which ones they like most. The public can weigh in by “liking” their favorite bids. “It’s good to see the Blu Dot community come alive,” says John Christakos, co-founder of Blu Dot. “It can be tough getting to know who your customers really are, and this lets us do so, and gives them the chance to display their collective creative spirit and humor.” As of press time, the majority of the auctions are still in progress, although one notable event did conclude: a sectional sofa in exchange for a stay at Frank Lloyd Wright’s Life Magazine Dream House in Wisconsin. The live auction will be held through March 16. For more information or to place a bid or a “like,” visit