completed construction of the local seven-room

bed-and-breakfast in 2008. The accolades were immediate. But it was only in 2012 that Burton Baldridge himself joined the AIA and officially submitted the well regarded South Austin property for an award. To the surprise of no one (including the jury, who wondered only what had taken so long), this fall the firm was selected from among 227 entries to win one of 13 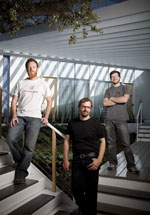 “It was a clever use of a difficult site,” says Baldridge. Besides being triangular, having a nearly impenetrable amount of overgrowth, and sitting in a residential neighborhood just off a major artery serving bars and beer trucks, the 12,000-square-foot lot had challenging topography.

“The slope across the street frontage was almost exactly what an ADA ramp would be,” says Baldridge. “Could we use it to cut off the building from the weirdness of the site?” Yes they could.

At the time Baldridge was working for New York-based

on the Austin Floating Box House. He showed off this prize project to Kimber Modern’s owners – Kimber Cavendish and Vicki Faust – to convince them he was right for their job.  “People kept presenting safe options to them, but they knew there was great potential,” says Baldridge.

Cavendish and Faust interviewed 10 architects to help them figure out how the heck they would build on their unique lot. “It was hard to find high end modern design here,” says Cavendish. Baldridge shared their design aesthetic, and interest in perfection, ultimately leading to the creation of what Baldridge calls his “audacious yet Zen’d-out structure.”

The outside will tease you, says Cavendish. “But when you walk in you get the wow thing. It’s the intangible feeling. The innovation is in the form, function, and positioning on the lot.”

These days, as president of the firm he incorporated in 2006, Baldridge and team are busy with new homes and commercial projects, including the soon to be completed 10,000-square-foot

(and office). “It’s a great time for us,” he says, modestly. And for everyone who experiences his Austin.