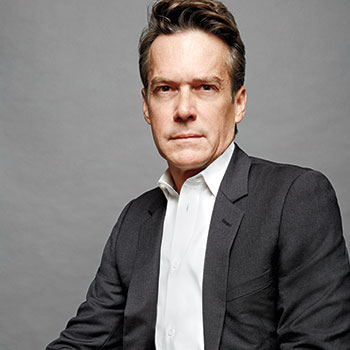 Longtime Skidmore, Owings & Merrill partner and Interior Design Hall of Fame member Stephen Apking is a leading master of office design. In his 30 years at the firm, where he interned before earning his master’s in architectural history from the University of Virginia, he has focused much of his practice on creating environments where people can do their best work. Among his high-profile projects are Hyatt’s global headquarters in Chicago and the Maryland home to the United States Census Bureau. A recent large-scale project took him further afield: to Mexico City and Madrid, where he guided Banco Bilbao Vizcaya Argentaria, the second largest bank in Spain, in establishing global interior design guidelines for its headquarters, operations and data centers, and regional offices.

Stephen Apking: It’s a global organization that had grown very quickly after merging with a number of other banks, including Bancomer, the largest in Mexico. A great transformation was taking place within the organization. Management realized the company needed a universal platform that would allow all employees to work as one new entity.

ID: What were first steps?

SA: They centered on research and change management. We developed a series of workplace models, and then built two versions of them: one in Madrid and one in Mexico City. After, we observed and performed analysis to see how well the guidelines were working; where modifications were needed, we made them. The models helped the client get the ultimate buy-in in terms of testing out what we were doing. The engagement process is important.

ID: What are the project components?

SA: Four new buildings—three in Mexico City, two of them by SOM and one by Legorreta and Rogers Stirk Harbour + Partners, and one in Madrid by Herzog & de Meuron—and their interiors, as well as interior and workplace guidelines for all existing BBVA spaces around the world.

ID: What guided the architecture of the new buildings?

SA: A few principles. One was a sense of campus and community. Pathways in and among them create connectivity. For the tall towers in Mexico City, elevators, stairs, and atriums make vertical connections. For the horizontal building in Madrid, it’s more about bridges. Outdoor space was also crucial, so there’s access to roof terraces, gardens, and courtyards where staff can dine and work outside. And then that buildings are not monolithic or uniform, that each one relates somehow to its local culture and clients.

ID: Aesthetically, what stands out?

SA: A sense of bold joyfulness, which we achieved through color, shape, and form. Because of the company’s Spanish heritage, the client really embraced those elements.

ID: What about the interiors?

SA: Ceilings, furniture, moveable walls—the idea is that all would be more universal and consistent throughout the organization. Every employee would have an iPad, the best task chair, the same kind of accommodation. Everyone would be treated equitably.

SA: Yes. For some organizations, we act as a trusted advisor for years. We’ve been working with Goldman Sachs for decades, on the Manhattan headquarters, the office in Jersey City, and recently in Salt Lake City. We’re continuously evaluating and honing. To design appropriately you have to know an organization’s DNA as well as understand the zeitgeist, and then merge the two to create environments that function well long into the future. You have to build with a lot of agility.

ID: Did that come into play with BBVA?

SA: We designed what we call ‘multiple futures’ within the guidelines, to prepare for when the next generation of technology comes. For instance, we designed elements that would allow the number of types of workstations to shrink. At first, everyone was assigned their own desk; now, we’re having them move to “free-addressing,” where employees move freely, working where they chose in the office. We help give an organization resiliency and agility as it continues to change.

Also important to BBVA, and increasingly to all of our clients, is people metrics, aka employee satisfaction. Clients want to hear their employees say, “This office actually works well for me.” Key points that can lead to that are providing places for staffers to relax, refresh, and create, and a workplace that they are proud enough of to have friends and family visit.

ID: How does SOM’s legacy impact your approach to projects?

SA: We have a responsibility to the firm’s legacy of innovation, but we also have to continue to research and reposition in order to be relevant now and in the future. Our Geneva HQ for Japan Tobacco International is a good example. Our teams tackled structure, architecture, interiors, and graphics, resulting in a real clarity, a whole legibility of systems throughout. And the project had a sustainability focus. In terms of the SOM legacy, we maintained it and pushed it forward. Every generation has to do some redefinition.