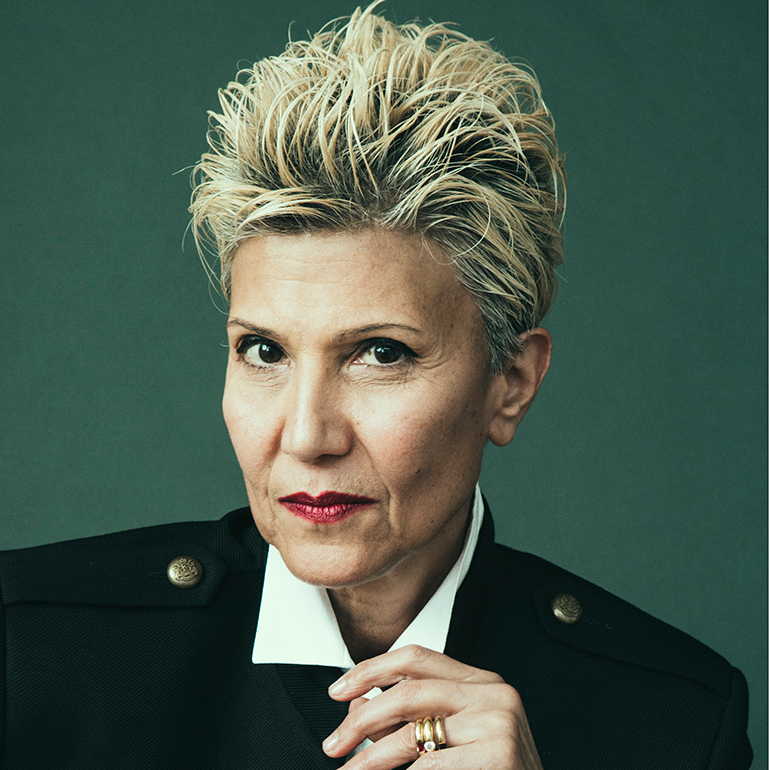 On today’s episode of Hello Cindy! host Cindy Allen (@thecindygram), Editor in Chief of Interior Design, caught up with Gisue Hariri, Hall of Fame inductee and one of the founding sisters of New York-based Hariri & Hariri Architecture. Speaking of New York City, where Hariri joined in from, Allen reminded viewers to tune in on Facebook Live this upcoming Monday – May 18 – for our virtual NYCxDesign awards.

“I live like a monk now because I don’t go anywhere and I meditate all the time,” Hariri joked about her new lifestyle under quarantine. “I don’t know if I like this Zoom thing so much,” Hariri says, although she’s been connected with her family the whole time. Over video chat, they’ve celebrated everything from birthdays to the Iranian New Year. Anyone who knows one Hariri knows the other, and the time Gisue is spending apart from Mojgan has been difficult for them both.

“When you don’t foresee what’s going to happen… it was really nerve wracking,” Hariri admitted. As a person who runs an office and cares about the professional and personal well-being of everyone on her team, the first weeks of this pandemic were an anxious time for Hariri. In her 40 years in New York City, she has never seen it this quiet and empty. But when everyone starts clapping in support of frontline workers, the city comes alive and becomes “very beautiful,” she adds.

“And 40 years later, we’re still here,” Hariri said, pointing out that her business has withstood multiple recessions and tragedies such as 9/11. “I’ve been lean and mean,” she said. That mindset has won Hariri & Hariri many global prizes. One example, which Allen showed on screen, was a home in Salzburg, Austria that is part of the Jewels of Salzburg project. “It integrates public and private with landscape pieces,” Hariri noted about her realized dream of a “nature architecture” project. When the client told Hariri that her design changed the way she lived, Hariri knew her mission was complete.

Hariri’s latest project, and one she is especially passionate about, is a sustainable and portable tent. Hariri describes the project as “architecture that’s somewhere between a car and an airplane because it collapses and erects itself up.” Of course, design is often a solution to a problem. This design is one Hariri wants distributed globally so that the millions of people worldwide, who are homeless and live in environments prone to natural disasters, can have access to shelter. The lifetime of the tents distributed by the U.N., for example, does not measure up to Hariri’s design and she is working hard to get her version in their hands.

During this time of slowing down and staying home, Hariri has had major revelations about what “this life is all about,” she says. The secret? It’s all about love and kindness, stopping the harm that’s been done to our planet and ourselves, and making things that remain for the generations to come. “Hopefully, this time will make us realize how much we love each other,” Hariri adds, anticipating the moment when the two women can share a non-virtual hug.