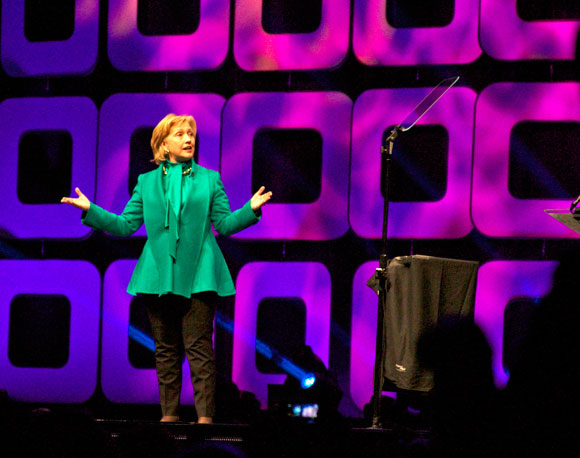 Hillary Clinton addressed a crowd of 10,000 at Greenbuild in Philadelphia. Photo courtesy of Green Philly Blog.

Former Secretary of State Hillary Clinton addressed an audience of 10,000 as the keynote speaker at the U.S. Green Building Council’s

last month in Philadelphia. During her 22-minute speech at the Liacouras Center on the Temple University campus, Clinton’s green message rang clear, but it was not one of Presidential politics, and she steered clear of any references to the 2016 campaign. Instead, her strongest statement: “The future will belong to those countries, communities, and companies who are looking forward over the horizon rather than standing pat or even looking backwards. Who are making choices and investments that will put them further ahead tomorrow. There is no doubt any longer that green buildings are the best investments we can make.”

Still looking to the future, Clinton said, “By 2015, the non-residential market for green construction is estimated to grow between $120 and 145 billion.” Clinton also extolled her long-time support of the

, citing how it was founded in 1993, the same year that she and her husband, former President Bill Clinton, moved into the White House. In that first year, the Clintons took on a major “greening of the White House,” which involved updating the A/C and heating systems, replacing windows, and installing compact fluorescent light bulbs. “By 1996, we were saving more than $150,000 a year in energy and water costs,” Clinton said. “By 1999, that figure had doubled.”


Clinton went on to praise the recent success of the retrofitting of the Empire State Building, which, in two years’ time, has cut the New York icon’s energy usage by 38 percent and $4.4 million each year. The building received LEED Gold for Existing Buildings certification. Clinton said, “When the Empire State Building opened in 1931, then governor Franklin D. Roosevelt said, ‘This building is needed not only by the city it is in, but by the whole nation.’ Today I would argue that the work [the USGBC] is doing is needed by the whole nation and the whole world. We need to make sustainability the rule, not the exception.”


She explained how the green building movement is, of course, about combating climate change and protecting our environment. “After all, 15 percent of carbon emissions from around the globe come from [buildings in America] and they consume roughly one-third of the world’s energy,” said Clinton. “So the [USGBC] is helping the United States reduce our own carbon footprint, putting us in a better position to urge other countries to do the same.”


In addition, Clinton touched on her time as Secretary of State, mentioning that, on her watch, legislation was passed making it a requirement that all new construction of U.S. consulate buildings around the globe must meet at least LEED Silver standards. “I traveled to 112 countries [as Secretary of State] and saw a lot of places that somehow have either been influenced or directly helped by the sustainability agenda of the council,” she added.


The keynote was seemingly free of overt political discourse, but nonetheless

some have interpreted her acceptance of the USGBC’s keynote invitation

as a strong reminder that the Democratic party is, after all, the only one in the position to back green initiatives. 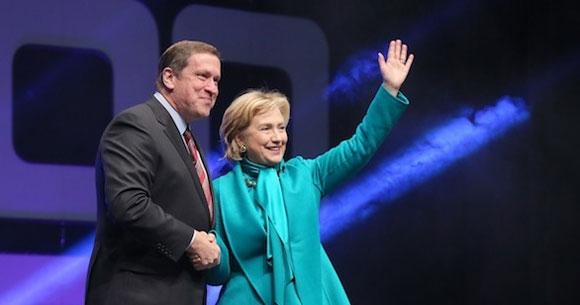 Rick Fredrizzi, president and CEO of the USGBC, with Hillary Clinton. Photo courtesy of the USGBC.