HOK to Design Porsche US Headquarters

With the exception of the gas-consumption issue, you have to love a Porsche. The speed, handling, and design have long drawn the admiration of car-crazed America. Now, Porsche gives back the love by building a new headquarters for

in its current base of Atlanta. But

, which won the commission, is not planning any old contract design. Rather, the

will produce a 200,000-square-foot complex, which will be the centerpiece of a 26-acre aerotropolis near Hartsfield-Jackson Atlanta International Airport. For the uninitiated, an aerotropolis is an urban plan designed around an airport, often composed of office parks, hotels, and cargo holdings, which is just as accessible to commuters half way around the world as it is to those living within a few miles. 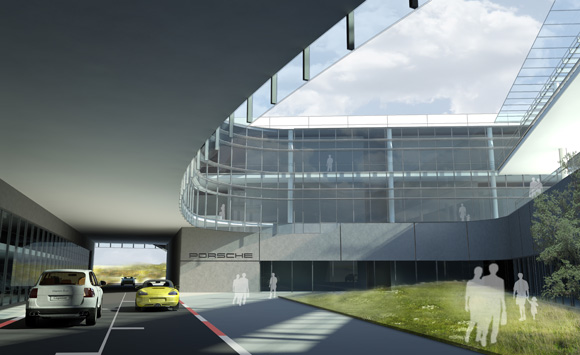 Some 400 employees will work not only in the company corporate offices, but will fill out a technical service and training facility as well as a Customer and Driver Experience Center, the latter of which will include an indoor road-handling track. Riffing on interactive museum practice, the building will also include a Main Street courtyard where visitors will be able to engage with the latest models and view any activity on the track below. Green solutions, such as natural ventilation, on-site energy generation, planted roofs, and gray-water systems will contribute to the firm’s pursuit of a minimum of LEED Silver for the project. And as such a design-minded client will surely contribute to the creative process, maybe HOK will get a few ideas from whatever super-secret hybrid, we assume, the racing champion has in development. Gentlemen, start your engines.