New York’s landmark Grand Central Terminal is turning 100 in February, so the

asked three international architectural firms to come up with plans to transform today’s congested terminal and its surrounding clogged roadways into an area suitable for contemporary, fast-paced commuters.

—each presented their “The Next 100” plans at the MAS Summit for New York City. All three presentations conceived of a future that would depart radically from today’s design, in which the station’s visitors and commuters, who can number more than a million during peak periods, compete for space in cramped corridors leading to underground train and subway lines, as well as on nearby sidewalks and car-choked roadways. 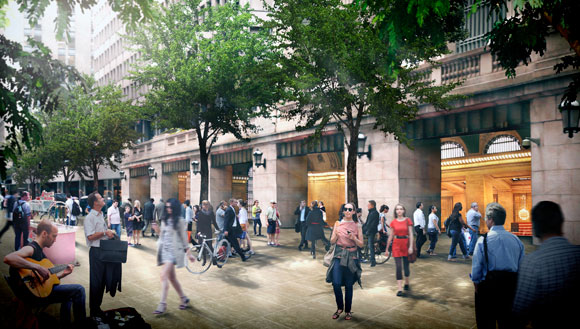 
The architects’ designs would greatly enlarge and brighten the current dark commuter passages. There would be tree-lined plazas, roadways designed to accommodate walkers and bicyclists, as well as automobiles, and trees and other greenery in plazas, on rooftops and along sidewalks.

Foster + Partners, for example, would remake Vanderbilt Avenue, to the west of the terminal, into a pedestrian-only walkway. Skidmore, Owings & Merrill proposed a circular observation deck, suspended above Grand Central, with 360-degree views of the city while WXY’s  suggested a soaring new tower adjacent to the terminal that would be adorned with rooftop and terrace gardens. 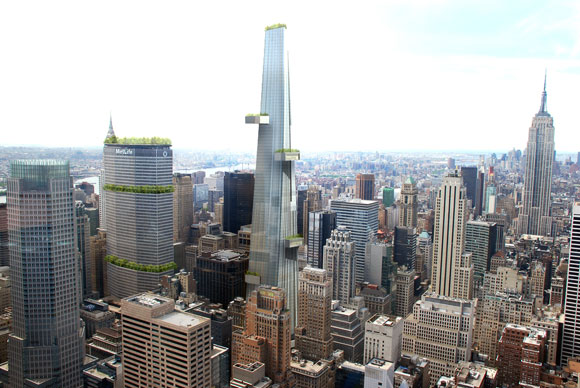 
Says Claire Weisz, founding partner of New York design firm WXY Architecture, “With the hundreds of thousands of daily trips into and out of Grand Central, the environment in and around this area has the capacity to evolve along with the destinations have already achieved those ends, and are already great destinations. “

The concepts were presented against the backdrop of the Bloomberg Administration’s proposed rezoning of Midtown to make room for a large number of new office towers. The City Council is expected to vote on the plan by October 2013.