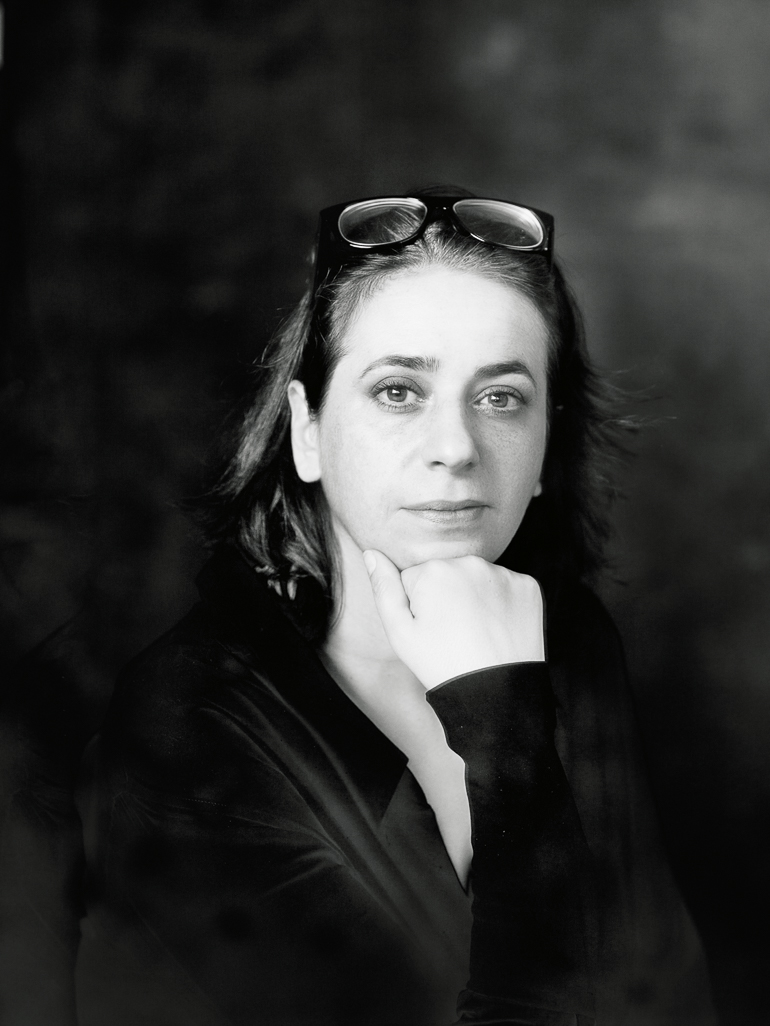 “I don’t want to sound like I’m boasting, but I changed the way people thought about pink,” India Mahdavi begins. The architect and designer is talking about making the color cool, a feat she achieved by saturating the Gallery at sketch, the London restaurant she designed in 2014, in a single shade of pink—a shade that is both the pink we all see in our minds when we hear the word but also quite unlike any pink we’ve ever encountered before. It was clever and radical, an Instagram sensation, and encapsulated everything that makes Mahdavi who she is: a creative who “reinterprets the times we live in in a sincere, fresh, and modern way,” according to Ralph Pucci, who, in 2008, brought her furniture stateside to Ralph Pucci International gallery in New York.

London, New York…Mahdavi is something of a nomad. Born in Tehran to an Iranian father and an Egyptian/English mother, she spent her childhood, the middle of five children, in a household where French and English were spoken, moving between Cambridge, Massachusetts; Heidelberg, Germany; and the south of France, absorbing the widely different landscapes and aesthetics of each place. Age 2 to 6, her time in Cambridge, where her father was attending Harvard University, gave her a lifelong love of cartoons and pop-bright shades of pink and green. Germany gave her a deep respect for rigor and structure. France taught her the power of understated elegance.

Mahdavi’s training—an architecture degree from the École des Beaux-Arts in Paris, followed by studies in industrial, graphic, and furniture design at the Cooper Union, the School of Visual Arts, and Parsons School of Design in New York, and then seven years at the namesake firm of fellow Hall of Fame member Christian Liaigre, with whom she worked on the Mercer hotel—was equally culturally eclectic, leaving her with an independent approach to design. Mahdavi had learned the rules—and that they could be broken.

And breaking the rules is what she has been doing since she founded IMH in 1999 in Paris, where Mahdavi currently lives. Asked to pick the piece of furniture she’s most proud of, she chooses her Bishop stool, first designed in 2004 for APT, a Manhattan nightclub, now in the permanent collection of the Musée des Arts Décoratifs. “It can be a stool or a table, but it doesn’t respect any of those norms because it’s the height of neither,” she explains. “I called it Bishop because, like in the chess game, it takes the diagonal instead of a straight line.” Recent furniture launches include the rattan Cap Martin round sofa, an extension to a 2009 collection, and Bugs Bunny, a coffee table that, at first sight, appears to have a top of expertly crafted straw marquetry, which it does, but that’s also subtly inlaid with the famous cartoon rabbit. It’s currently on display at her showroom and studio, simply called India Mahdavi, on rue Las Cases.

Her interiors embody a similar playful irreverence. In 2017, for the macaron-specialist Ladurée, she created a Los Angeles tearoom akin to a garden of delights, with pistachio-colored walls, icinglike lattice, and tables resembling meringues. Earlier this year, she designed a beachy backdrop of distorted stripes for a Centre Pompidou exhibition at the International Design Parade in Toulon, France. She is conceiving Makoto, a Japanese restaurant in Miami for Stephen Starr, opening in 2020 and featuring flower-shape banquettes. “India’s work has humor, but it’s not 100 percent humor, which would make it kitsch. It has sophistication, but it’s not 100 percent sophistication, which would make it predictable,” Pucci adds. “It’s this perfect balance that makes her work original.”

Everything in Mahdavi’s brimful portfolio is functional—she believes that purpose is fundamental to good design, beauty impossible without it—but also touches our lives on an emotional level. To encounter an interior, furniture piece, or item from petits objets, the name of Mahdavi’s home-accessories line, by her is to connect with something deeper than decoration. “There is a level of visual as well as physical comfort to my work, and a sensuality in the textures I use,” Mahdavi says. “But more than anything, there’s a familiarity, something that speaks of the landscape of people’s lives.”

She’s right. Her rounded shapes and cartoon-color palette return us, almost subliminally, to childhood, and that leads to what is perhaps Mahdavi’s greatest strength: her ability to design spaces, furniture, and objects that bring us joy.