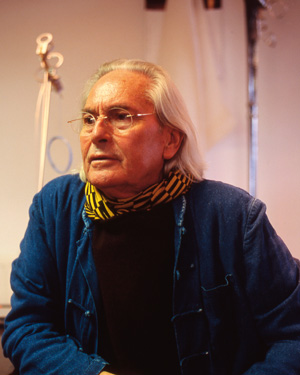 makes lighting feel like a discovery. No matter how familiar or even plain a fixture’s parts, it throws an emotional switch to “On.” How else to explain the instantaneous delight in Lucellino? (His signature winged lightbulb.) Then there’s the mischievous mirth triggered by Porca Miseria! (A chandelier made of exploding crockery.)


Maurer has a knack for tapping into deep resonances with themost elusive of materials: light.This ability may well have sprung from his early experiences. As a country boy, he was mesmerized by the play of sunlight on Germany’s Lake Constance, where hisfather was a fisherman and an inventor. This fascination developed quickly into a talent for designing witty, sophisticated objects.


His first significant fixture was 1966’s Bulb, a standard tungsten lightbulb trapped inside a pumped-up one-cartoon, icon, and homage, all in one. The inspiration for Bulb is typical of how he works from the experiences of the everyday: Lying on a bed in a cheap pensione in Venice, he was transfixed by the bare ceiling light. Ta-da!


Maurer thought no one elsewould be interested in Bulb, so he manufactured it himself. Ofcourse it was a huge success, selected for the permanent collection of New York’s Museum ofModern Art four years later. That combination of serendipitous discovery, determined entrepreneurship, and curiosity to know how the world is going to react to hisnext experiment remains the hallmark of the Maurer method. Just looking at him, with his wild white mane and riveting blue-eyed gaze, creates the impression that here’s someone who’s always got something up his sleeve. Sheer joy is often part of the mix, too.


Bibibibi, a table lamp, might be composed of plastic chicken legsand a bit of found feathers, butthat shouldn’t imply that Maurer’s work lacks technological complexity. A high-wire act for low-voltage halogen lamps, YaYaHo is a staple in hip restaurants the world over.Maurer collaborated with engineer Hermann Kovacs to develop TouchTronic, a touch-triggered dimmer that takes advantage of the conductivity of the human body. Maurer’s recent work with LEDs, embedded in everything from glass tables to wallpaper, has kept him well ahead of the curve in the lighting industry. Currently, he’s trying to find ways to brighten the effect of a new source called OLED, for organic light-emitting diodes.


Hardly a solitary artist, Maurer is the first to share credit with hisworkshop of 60 people. Quite a few of his pieces also call for constant interaction with their owners, whom he has designated his “co-designers.” YaYaHo has a proliferation of customizable parts; the Zettel’Z chandelier comes bristling with blank pieces of notepaper and an invitation to scrawl your own messages. The exquisite table, floor, and pendant lamps of the MaMo Nouchies series are made of Japanese paper, using traditional dying and binding techniques that take eight days.


Maurer’s curiosity about the creative life is what keeps him going. For years, he has reveled in that artists’ mosh-pit extraordinaire, the Burning Man festival in the Black Rock Desert of Nevada. In 2004, he was commissioned alongside artists Sol LeWitt and Richard Serra to design installations for Toronto PearsonInternational Airport: Maurer’s piece, Earthbound-Unbound,involves fish and floating glass cubes. For popular appeal, nothing quite competes with the gigantic crystal snowflake he designed for UNICEF to set a holiday mood each winter at the intersection of Fifth Avenue and 57th Street in New York.


Farther up Fifth, “Provoking Magic: Lighting of Ingo Maurer” at the Cooper-Hewitt, National Design Museum, attempted to capture and convey a glimpse of his particular genius via known and new work as well as installations. He walked through the opening of the exhibition, marveling at the sheer range of his own output. But he was already thinking ahead-to a light column he’ll be creating for a public square in South Korea. You could almostsee the lightbulb switching on over his head.


<<Back to All Hall of Fame Inductees