Idealism flavors John Cetra and Nancy Ruddy’s unique brand of cosmopolitan luxury, blessed with helicopter views and outdoor living space. And you see all of that in CetraRuddy Architecture’s most recognizable commission. Standing at the foot of New York’s Madison Avenue, this unexpected residential skyscraper’s lean bronze-tinted glass tower studded with clear boxes works like an obelisk mark­ing the start of a Roman boulevard. “We love the play of the tower volume against the sky,” Ruddy says.

That project was a seven-year odyssey. Nothing short of unflagging grit and determination got Cetra and Ruddy through the many challenges, among them the fact that the base of the building had to be engineered to overhang a McDonald’s that refused to budge. For that reason alone, their building is noteworthy. Altering local paradigms on multiple levels, it also led the way for the spike in ultra-luxury condominiums.

However, as visionaries forging the city’s future, the couple also works at a smaller scale. Consider a Brooklyn housing development. This low-rise apartment building is clad with subtle terra-cotta tile detailed with reclaimed oak, giving texture and depth. 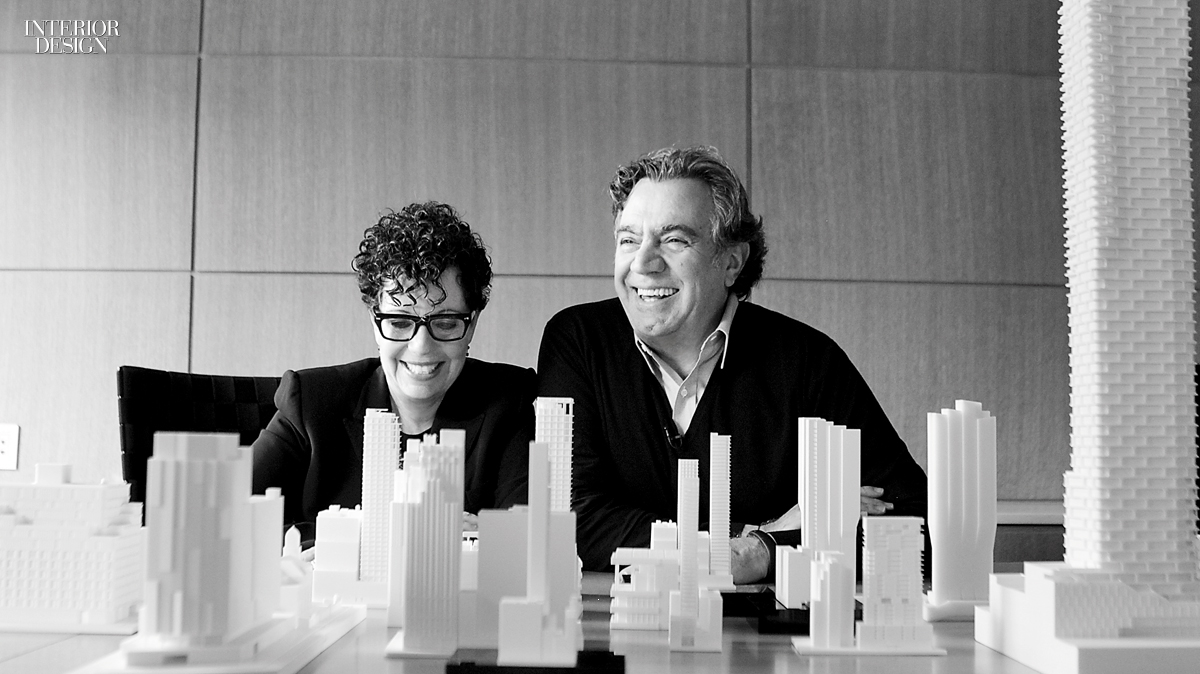 Ruddy mentions the pleasure she takes from sketching light and shadow, using charcoal. She started out as a Bard College painting major “interested in anything visual,” she says, and came to interiors through architecture, which she studied at New York University and the City College of New York. She now sees design less as an aesthetic exercise than as an opportunity to connect with people.

Meanwhile, Cetra’s love of buildings was first genetic—his father had a brickwork contracting business. Additional insight into the singular poetics of great buildings came from academic study, also at City College and then at the Harvard University Graduate School of Design. “I realized that architecture, even when it was meant as shelter, might attain a higher level of design,” he says.

It was while attending City College that the future husband and wife met, auspiciously, in line at a bodega. “She turned around and smiled at me,” he recalls. Soon, she adds, “He was hanging around my studio.” They dated while working for others. A year after marrying, they founded their firm. That was 1987. Early projects included transforming a bank into graduate dorms for NYU, and adaptive reuse is still a part of the portfolio, a recent example being the conversion of a landmarked 1884 bookbinding facility into super-luxury apartments.

New construction started to seem increasingly appealing around the turn of the millennium. To attract big-time real-estate developer clients, a mentor advised, “Just get something out of the ground.” That something turned out to be a 10-story apartment building, which indeed opened doors.

To appreciate just how far CetraRuddy has come since then, stroll across the street from that relatively modest mid-rise to the jaw-dropping Walker Tower, which combines old and new. The firm both performed a residential makeover on the 1929 skyscraper, built by noted architect Ralph Walker for the New York Telephone Company, and supplied a rooftop addition. Its high-ceilinged penthouses trade among celebrities and members of the 1 percent.

Non-residential, non-U.S. projects have entered the picture as well. Currently under construction in Jeddah, Saudi Arabia, is the Galleria Hotel, where traditional Islamic patterning infuses the interiors, 373 guest rooms and suites above a luxury mall. Next year will see the first phase of the Choice School in the southern Indian state of Kerala. The idea grew out of conversations with the Indian owner of an apartment in a CetraRuddy development in Jersey City—towers with aqueous curtain walls of blue and green mirror—and has evolved into a luminous, filigreed zigzag building to accommodate 12 grades. For Cetra and Ruddy, working on this project, for a reduced fee, is just one more chance to make some history of their own.