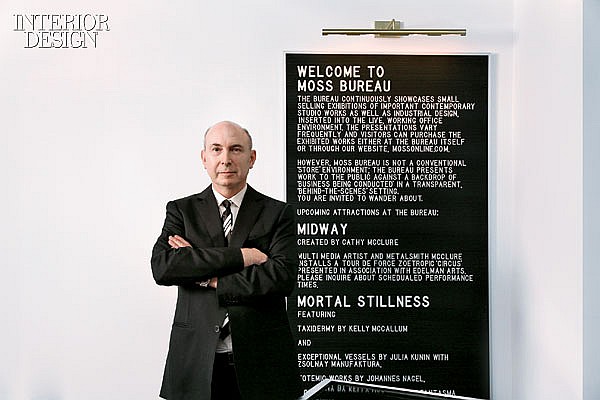 
“The only thing I haven’t done is practice law,” jokes Murray Moss, whose unique career path has taken him from actor to design arbiter-arguably the world’s leading one. (And he’d be the first to argue. Against.) His two Moss stores, the 13-year-old New York original and the five-month-old Los Angeles outpost, are meccas for the design-obsessed: museumlike spaces with items arranged in pristine glass cases or on floating white platforms, juxtaposed to resonate and reveal. Oh, yes, and to sell.


Moss, the store, came indirectly out of work with fashion designer Ronaldus Shamask, whose Shamask label Moss, the man, launched in 1978. Moss sold the business in 1990 and took some time off, he says, “to think.” He’d been manufacturing in Italy for nearly a decade, getting exposed to the explosion of industrial design there. “A lot was happening at that time. I was seeing things that weren’t really in the U.S., at least not on more than a very limited basis,” he says. “It was adult education of my own making.”


That education got Moss looking at industrial design as a sister business to fashion, despite the different ways the two were merchandized. “Objects were still being arranged by function-plates with plates, spoons with spoons. Clothing wasn’t sold that way anymore. It was organized by point of view.” Moss realized that, by putting an Enzo Mari vase with an Enzo Mari chair or grouping shiny silver things with other shiny silver things, truths buried in the designs could be brought out.


He approached a handful of companies with this revolutionary concept but, he says with a laugh, “No one wanted to do it!” Realizing, somewhat reluctantly, that he’d have to go it alone, he opened his first Moss store in 1994, strategically placing it among the galleries of SoHo. Moss felt that, compared to a location in a more standard retail neighborhood, the artistic surroundings would generate a better energy and a better mind-set in the people coming in.


Ironically, of course, retail is exactly what SoHo has become, and the store has evolved as well. When Franklin Getchell became a partner in 1999, the space more than doubled in size. Then came a gallery for special exhibitions and a wine bar, Centovini. Now, the gallery has been reabsorbed into the overall retail operation, and the original store has transformed into a joint effort with Moroso and Maharam.


One thing that hasn’t changed is Moss’s love of collaboration. “The objects are actually less interesting to me than the people who create them,” he says. Right from the start, he began seeking out and working with young designers, often when they were still in school or doing experimental pieces too raw for wide distribution.


Such was the case with

, the Dutch collaborative Moss showed before it was even making viable product. “We can show and sell ‘experiments’ thatmay be in too early a stage to be seen on a larger level but still need to be seen,” he says. His contact with Droog also exposed him to its original members’ alma mater, the Design Academy Eindhoven, a place from which so much talent continues to emerge.


Back in 1994, Moss thought he’d be lucky if he stayed in business six months. What’s kept the store alive, he says with customary humor, is that it’s autobiographical. He never has to worry about being off-brand.