Ones to Watch: Apparatus Studio 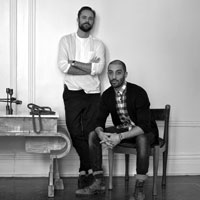 “It really started by accident,” says Gabriel Hendifar of the lighting collection he created with partner Jeremy Anderson under the name Apparatus Studio . Hendifar, a former fashion designer, and Anderson, who worked in PR, had just moved in together in Los Angeles. While in the midst of redecorating, they both became frustrated that there simply weren’t any lighting fixtures to fit their needs.

“We wanted something with a modern form but a sense of soul and age and imperfection in material,” says Hendifar. “If you can’t buy it, why not build it?”

And so out of aesthetic necessity Apparatus Studio was born. They began, as Hendifar puts it, “tinkering around” when a friend, owner of LA’s Gallery L7 , came over, saw what the duo was up and told them their pieces had commercial promise.

“It really started by word of mouth. Remodelista picked up on us and a British design consultancy somehow found us and used our product for a restaurant in Shanghai. It really just took off from there,” says Hendifar.

The designers, now relocated to New York, work with artisans to handcraft the metal and wood pieces, but assemble everything themselves in their studio. Their fixtures, a melding of vintage and salvaged components with contemporary materials, bridge the gap between modern and vintage.

In 2012 they debuted their first collection at the International Contemporary Furniture Fair (ICFF) in New York. “That was the moment it became real and we could say, ‘okay, this is what we do now’,” says Hendifar.

Now, the public can buy direct from their studio or through galleries such as Twentieth Modern in LA, Cavalier in San Francisco and C Cubica in Mexico City. Next up is their second collection, which will slowly roll out in 2013 and be showcased at ICFF.

“We are exploring new materials, working with cast resin, horse hair and rubber. It’s a slightly darker edge,” says Hendifar. “We’ve been lucky to have had such a great year and really think about and define our aesthetic and what’s important.”

Ones to Watch: Solomonoff Architecture Studio

Ones to Watch: Egg Collective