In an upstairs gallery of the

in Washington, D.C., four-dozen shrieking Kindergartners from a local charter school have descended on the exhibition “Play Work Build” and are ripping it apart piece by piece and, with gleeful purpose, reassembling the pieces with architectural abandon.

principal Barry Richards could not be happier. His firm collaborated with the museum to create the interactive exhibit, centered around an indoor version of Rockwell Group’s

, a mobile play system of foam blocks in all shapes and sizes designed to encourage free play and collaboration. “The great things about blocks,” he muses, “is that no matter who they are or where they are, kids know exactly what to do with them.”

Rockwell has installed more than 600 site-specific playgrounds around the world; for this one, up through November 2014, they covered the floors and walls with the trademark blue foam and filled the space with hundreds of large-scale blocks and noodles. The blue foam space is book-ended by displays representing the old and the new in building toys, beginning with antique architectural toys culled from the museum’s collection of 2,300 sets. These range from 19th-century alphabet blocks to rare midcentury plastic molded toys. In between are the staples of David Rockwell’s childhood.

“I had older brothers so there were lots of Lincoln Logs, Tinkertoys, and Erector Sets around the house,” writes the Rockwell Group founder and CEO. “Then I started getting into Lite Bright and creating light constructions and I had a real passion for magic shows. I’d bring in the entire neighborhood, and we would build sets from scratch, using scrap materials, discarded boxes and random fabrics.”

Apparently, such experiences influenced many a budding young architect. The exhibition is peppered with wall-text quotes from famous architects attesting to their love of construction toys. Moshe Safdie of

even built initial models of his famously modular Habitat House out of LEGOS. 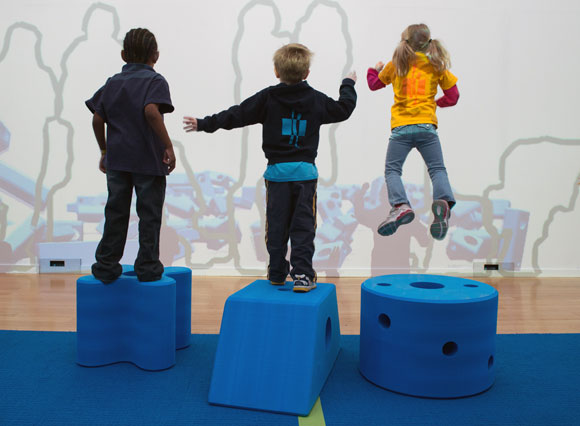 To decompress from all that building, visitors can head to the far end of the gallery, which features an interactive video projection created by Rockwell Group’s digital interaction team, the LAB. As if by magic, an outline of your body appears on a screen and seems to fill up with blue blocks. As soon as you jump or gesticulate, the virtual blocks tumble and scatter, only to start self-stacking again when you stand still.

The exercise serves as metaphor for the larger point of the exhibition: the infinite cycle of creation and destruction that compels architects of all ages to ask “what if?” – what if we could build it better next time?