has suspended 5,600 silicon rods from a 26-foot-tall armature in the Bill Rose Art Garden to form

, an immersive multimedia curtain. Through September 5, the installation will host videos and films by Mat Collishaw, Ori Gersht, Christian Marclay, and David Shrigley, among others, projected on the rods in an hour-long loop. (Watch a time lapse video of its installation

Interacting with the movements of its viewers, the projections are visible from within and without the circle and from different perspectives throughout the museum’s 20-acre park. 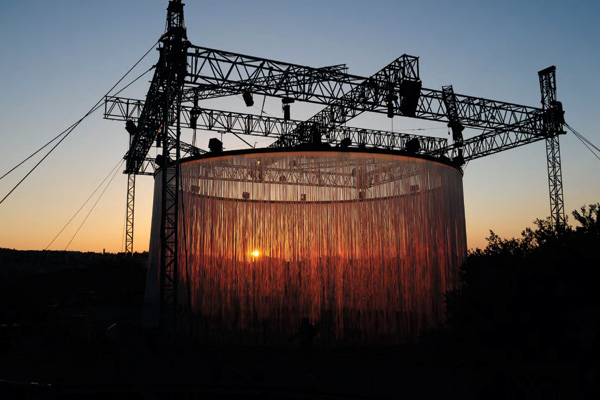 Installation view. Haim Yafim Barbalat/courtesy of The Israel Museum, Jerusalem, and the Jerusalem Season of Culture.

The Tel Aviv, Israel-born Arad launched his career as an industrial designer, artist, and architect in 1981 with the Rover chair, and went on to establish Ron Arad Associates in London. Over the past decades, Arad’s sleek yet sculptural vision has attracted manufacturing megaliths like Kartell, Kenzo, Swarovski, and Vitra. In 2010, he returned to Israel to clad the nation’s first design museum, Design Museum Holon, with Cor-Ten steel.

“Jerusalem has become a world-class cultural destination, and we hope that art and design lovers, and tourists of all kinds, will enjoy Ron Arad’s

as a catalyst to appreciate our beautiful city with fresh eyes and in a new light,” adds Nir Barkat, mayor of Jerusalem. 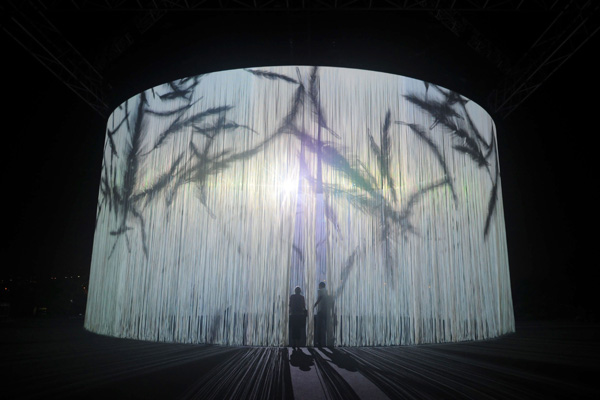 Installation view. Haim Yafim Barbalat/courtesy of The Israel Museum, Jerusalem, and the Jerusalem Season of Culture.

was originally developed and presented with the title Curtain Call as a part of the Bloomberg Summer at the Roundhouse Series in London last year. In Jerusalem, the project takes on site-specific significance thanks to surprise performances by leading Israeli musicians, dancers, poets, and actors staged within the circle and projected on the rods.

“By bringing the installation outside, the work becomes a part of Jerusalem’s landscape, changing both the skyline of the city and the feel of the installation,” says Itay Mautner, artistic director of the Jerusalem Season of Culture, which helped present the project. “It has a uniquely Jerusalem flavor.”