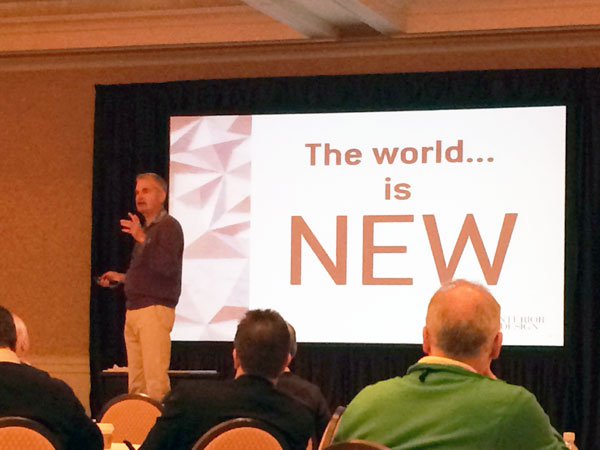 “My philosophy is that everything is new. It’s all around us. But it’s how we’re aware of what’s new that’s most important.” This was

(WA) 2015 Annual Meeting in Clearwater, Florida. Prior to speaking, Strauss was honored with a President’s Award announced by WA’s outgoing president, Bruce Gordon of

, and Beth Rich of

as the first-ever President’s Award recipients, selected for their passionate contribution to and support of the WA and the industry as a whole.


Strauss spoke on the impact of technology on the commercial wallcoverings industry, especially underscoring the need for self-awareness in this new climate. Even major legacy brands like Barbie and McDonald’s, he said, can misstep by not keeping up with rapidly changing lifestyles and business models. “Talk is now rare,” he says. “This is huge. And it just happened, it’s all new.” He continued by reporting on the findings of

’s 2014 Universe Study, which surveyed 30,439 qualifying design firms, a number that exceeded 2009’s firms by 21 percent. The average firm, notes Strauss, specifies $2.23 million a year in products, and most of them are involved in a growing number of projects across different sectors (8 in 10 are “generalists”). Yet, 45 percent of design firms reported that their go-to manufacturer sales reps for specifying and answering questions number less than five. So, yes, talking is happening less frequently, making the drive to become an invaluable source of information for customes and clients ever more important.


The meeting’s Tuesday proceedings also included a talk by Peter Phillipi, founder and president of

, on how to optimize your business with the 80/20 rule, the concept that most businesses achieve 80 percent of their profits from only 20 percent of their efforts. Phillipi advised on how to ”treat customers differently” according to their profit value, and especially underscored the value of finding and keeping talented people in your business. “People don’t like change,” said Phillipi, “but they like progress. The difference between the two is purpose.” Giving employees a sense of purpose and recognizing their value were also key tenet’s to Phillipi’s approach.


Seam Samet, the WA’s newly appointed executive director, oversaw the program and welcomed the new 2015 Board of Directors and new members as follows: