From an LA lounge straight from a Wes Anderson movie set to a cool New York rooftop lounge with 360-degree views, here are the best bar & lounge projects covered by Interior Design in 2019. 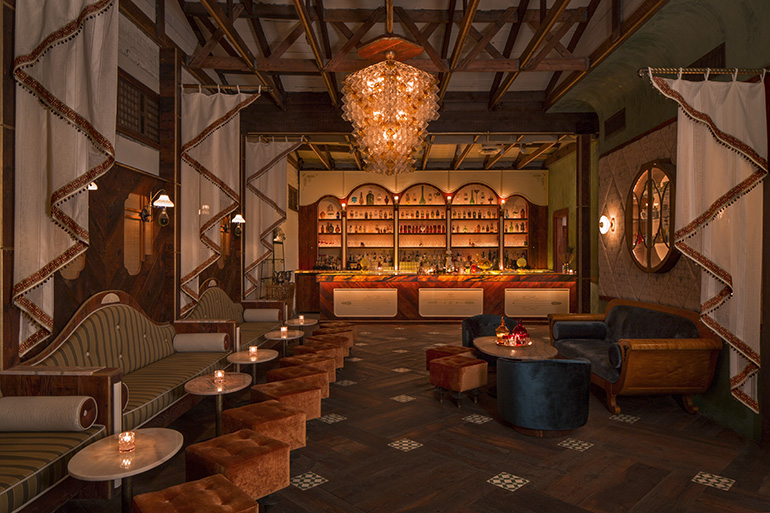 Ever on the hunt for the coolest drinking establishment in the most out-of-the-way location, Los Angeles’s lucky and intrepid will soon discover Apotheke. It’s deep in east Chinatown, overlooked by a barbed wire fence and a fierce street-art mural. Outside, the 1930s structure is freshly painted white brick. Inside, comes the surprise: an environment that could double as a Wes Anderson set. Read more about this project 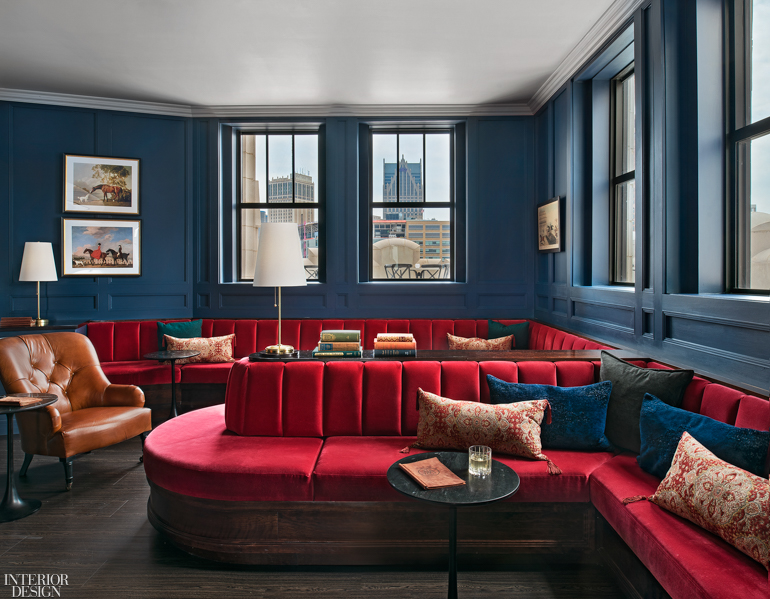 Downtown Detroit’s circa-1925 Metropolitan Building sat abandoned to the elements for almost 40 years before finding new life last winter as the Element Hotel. This fall, a crowning touch has been added to the structure: The Monarch Club, a rooftop venue featuring 2,500 and 4,000 square feet of interior and exterior space, respectively, comprised of a restaurant/lounge and three patios with stunning views of the refueled Motor City. Patrick Thompson Design, which created a bold mix of art deco and mid-century interiors for the Element, returned as the creative vision behind The Monarch Club. Read more about this project 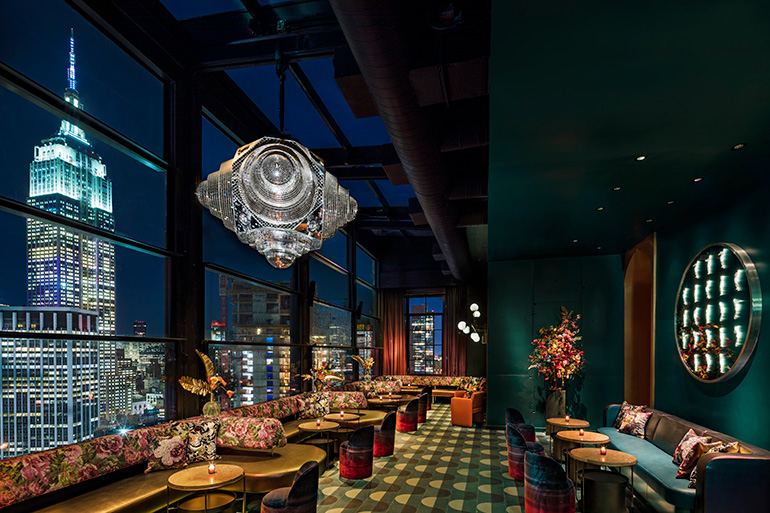 The Fleur Room is one of the most aesthetically-pleasing perches from which one can take in views of most of New York City’s major landmarks. The 360 degrees of visibility from the 35th-story lounge puts the World Trade Center, Statue of Liberty, and the Empire State Building right into the sight lines of guests. Still fairly new to the neighborhood, the Fleur Room opened in March 2019 as part of the Moxy Chelsea hotel. The jewel of a space is the result of a collaboration between Rockwell Group and TAO Group—two of Manhattan’s biggest names in design and hospitality, respectively. Read more about this project 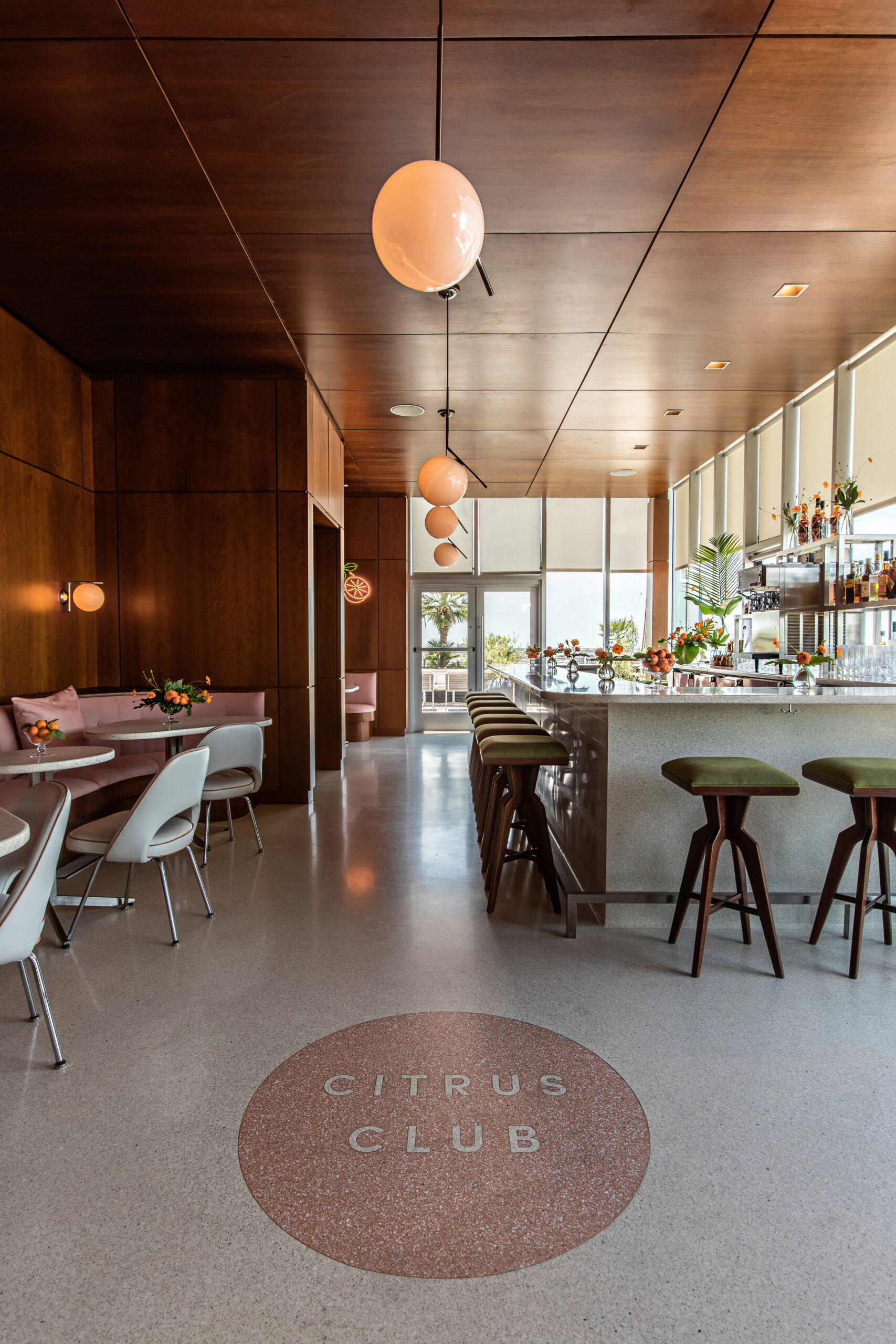 When The Dewberry Charleston opened in 2016, its mid-century modern perfection made the hotel, located in a former office building built in 1964, an instant classic, largely thanks to developer John Dewberry’s relentless sourcing of marble from Vermont quarries and furniture gems from Scandinavia. How to top it? With the Citrus Club, a tropical rooftop lounge on the hotel’s eighth floor. Dewberry says the bar’s palette, a mix of fruity pinks and cherrywood, was “inspired by my travels, mainly from properties along the Côte d’Azur of France and the Amalfi Coast of Italy, brought to life in collaboration with the design team at Workstead.” Read more about this project 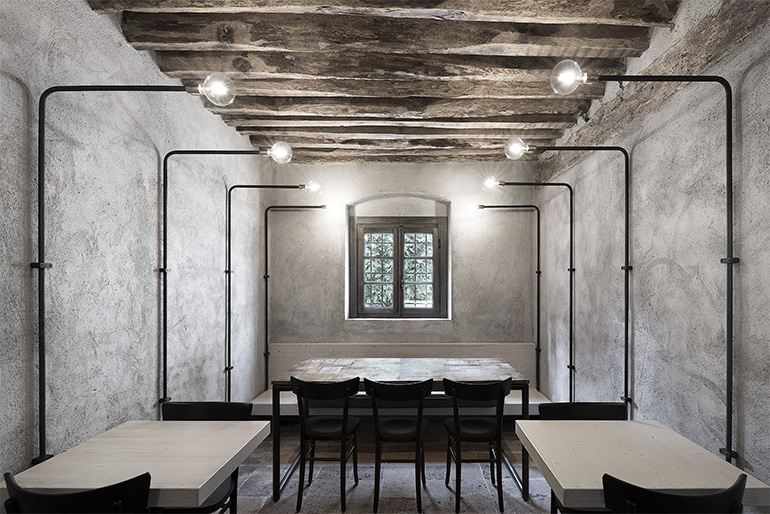 The legacy of 16th-century Palazzo Martinengo in Brescia is written all over its walls, which are subject to cultural heritage oversight and can’t be changed. But that doesn’t mean time must stand still: A former stable on the property has been transformed by Milan-based Studio Mabb into La Ganea, a beer and pizza tavern named for the ancient Latin word for a traveler’s “place of rest.” Read more about this project 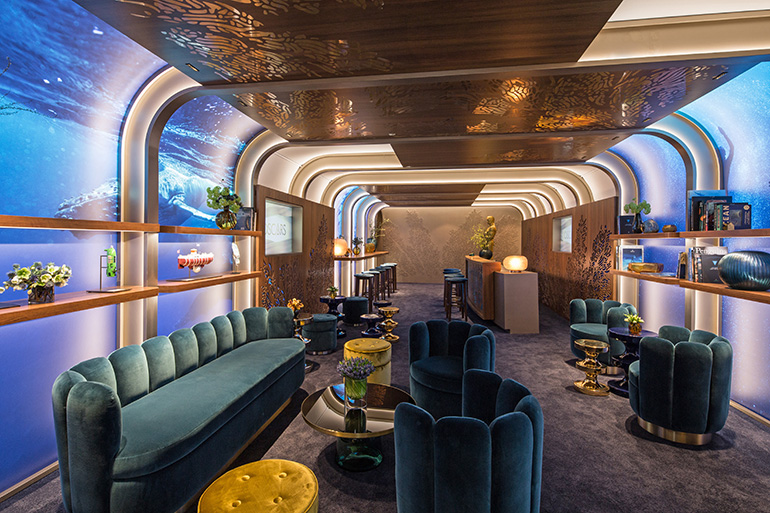 An Oscar statuette in your hand and a Rolex watch on your wrist—it’s safe to say that millions have dreamed of that scenario. These two icons of cinema and style coalesce this weekend in the design of The Greenroom at the 91st Academy Awards, being held at Los Angeles’s Dolby Theatre. It’s here in this Rolex-designed pre-stage area that the film industry’s biggest stars will wait—either anxiously or with cultivated cool—amid an imaginatively designed mise-en-scène. The theme is different every year and on Sunday night, in honor of Rolex’s Perpetual Planet campaign aimed at safeguarding the environment, it is a submarine voyage to the bottom of the sea. Read more about this project 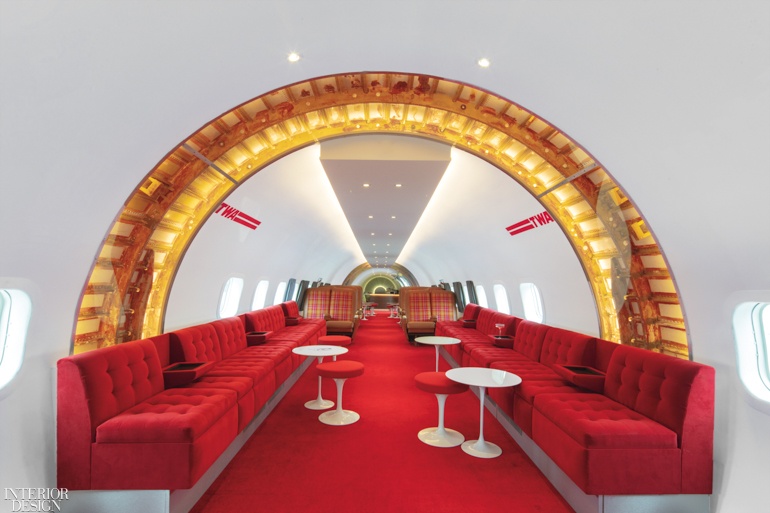 You expect Don Draper to appear any minute at the check-in counter. The raptorlike TWA Flight Center—a terminal for Trans World Airlines, designed by Eero Saarinen, built in 1962, and mothballed in 2002—is finally back, transformed into the lobby, restaurant, and ballroom of the new TWA Hotel at John F. Kennedy International Airport in Queens.  But the hotel delivers the punch line sitting on a piece of recreated tarmac between the iconic terminal and the two new hotel wings: The Connie, a 1958 Lockheed Constellation—the four-propeller airliner commissioned by TWA’s owner, Howard Hughes—still attracts passengers, though now they climb aboard just for cocktails. Read more about this project 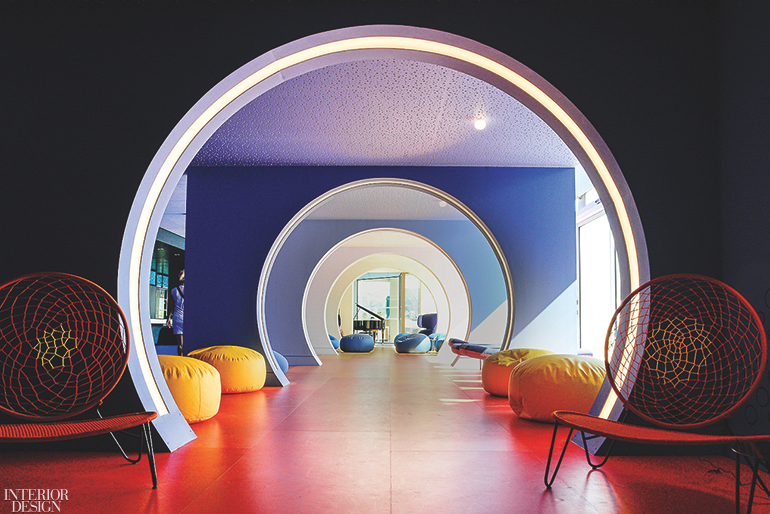 It’s practically a mantra: “I believe color is a material,” Teresa Sapey states. “It not only covers surfacesbut also molds them.” Even on the architect’s website, the tab between “about us” and “projects” is “color.” It reigns supreme in her latest project, 30,000 square feet of public space at the Nhow Marseille, a newly renovated hotel in the south of France. Since the property is sited on a rock overlooking the Mediterranean Sea, blue is dominant. But, in the arcadelike Tunnel lounge, the flooring and walls gradiate from violet and midnight to red, orange, yellow, and sky. The convention center is thematic in a different way. Read more about this project 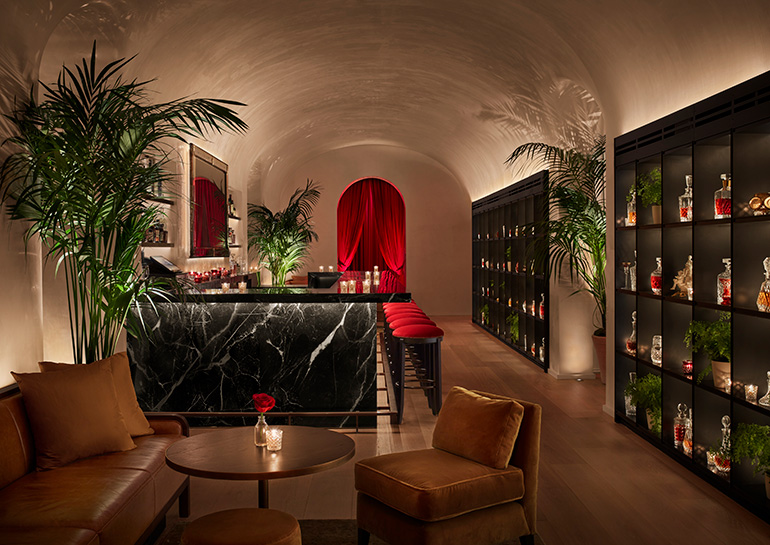 A space inspired by L’Orangerie at Jardin des Tuileries in Paris is the perfect antidote to the hustle and bustle of Times Square. At the recently-opened Times Square EDITION, the product of an all-star collaboration between Yabu Pushelberg and Ian Schrager, you’ll find exactly that at The Terrace and Outdoor Gardens.  Before reaching the garden-like feel of The Terrace, guests are treated to a glimpse of “the real New York City,” a photography exhibit curated by Schrager that showcases the vivacity of the city through the lenses of such renowned photographers. Read more about this project 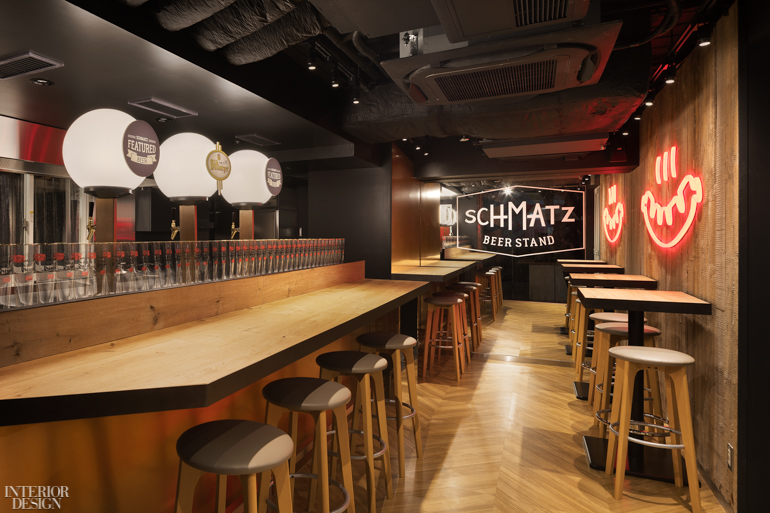 Three young Germans opened a food truck in Aoyama in 2014, dishing up sausages and Bergbaum, Hafenstoff, and Edelweiss draft beer brewed in-house. Five years later, the trio have 14 locations, including a new one tucked into a shipping container in a prime location near the Toyko Dome stadium. With only 25 square feet, I In partner Yohei Terui had little space to work with. “We used a mirror to make the inside space look as big as possible,” he says. It also reflects the juicy sausage-shaped neon sign. “I really like the complex shape with the very rough, wood background.” Read more about this project