If your primary residence in Rio de Janeiro, birthplace of the great Oscar Niemeyer, is characterized by architecture aficionados as a modernist masterwork, it’s hard to imagine how your New York pied-à-terre can possibly compete. But the members of this jet-setting Brazilian family were undaunted. 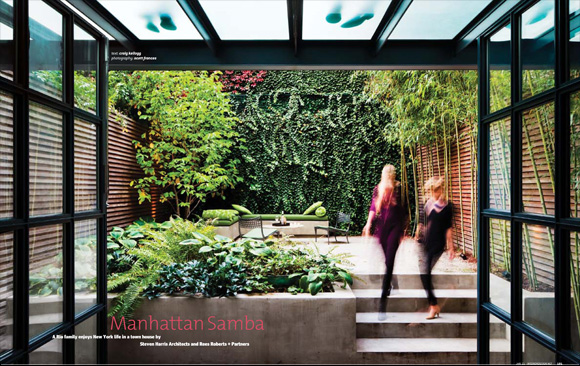 After buying a town house, they commissioned a complete transformation from Steven Harris and Lucien Rees Roberts, Interior Design Hall of Fame members as well as life partners. Their affiliated firms reimagined the four-story building as a place for a family with evident flair to touch down for, perhaps, a month at a stretch. “They’re really fun,” David Kelly of Rees Roberts + Partners starts out, going on to use the more restrained adjectives of elegant and courteous. As a landscaping specialist, Kelly worked on the project with one of his fellow partners, interior designer Deborah Hancock.

The call was for “exquisitely functional spaces,” as Harris describes them. Steven Harris Architects has a portfolio of 60-odd town-house renovations, and he was pleasantly surprised in this case by the underlying soundness of the 1840’s structure, dating from before running water was introduced to the neighborhood. The bad news, however, was that the 4,800-square-foot interior had been chopped into apartments, and the ground level’s rear kitchen extension was a clunker.

Because the house was more spacious than most, thanks to itsgenerous width of 23 feet, the kitchen could be razed and moved inside in favor of more footage forKelly’s garden. He framed it in honey-colored ipe clapboard and planted a stand of bamboo to screen nearby apartment windows. The view into this lush, almost tropical enclave is lovely from any of the house’s rear rooms now that Harris has replaced almost the entire garden facade with steel-framed casement windows and French doors, referencing the neigh­borhood’s history and casting a warm glow at twilight. Access to the garden is via the ground-level den-incidentally also home to one of the largest flat-screen TVs that Rees Roberts has ever installed.

One flight up, Harris completely reconfigured the parlor floor. The dining room, lined with shelves for art books, faces the street through divided-light windows, this time framed in painted mahogany. The windowless kitchen is just behind, and the airy rear living room opens to an unexpected glass-floored balcony. After two bedroom levels comes the rooftop lounge, a low glass cabana that opens onto synthetic turf. From here, guests can practically exchange waves with the party people at the penthouse bar of the Standard hotel.

Repose, by contrast, is the goal of Hancock’s interior color palette, which brings flow to the rationalized layout. “Since we knew there would be a lot of life in the artwork and furnishings, we kept colors mostly in the background,” she says. Wide floor planks throughout are white oak, whitewashed lighter. In the children’s bedroom, where the ceiling is densely lined with joists reclaimed during construction, walls remain a quiet white. The dining room’s library like shelving is painted a dark olive green. Walls and cabinetry in the kitchen are two shades of gray, with a coordinating marble-topped island. The pale gray of the living room flatters furnishings in lavender, putty, and black. As for the fuchsia accents, they’re a special request from the family’s adult daughter, who attended college in New York and spearheaded the renovation.

Stools in the living room flaunt fuchsia-and-black silk velvet tiger stripes. “I have fetishized that fabric for 15 years. It was so thrilling to have a client who would let me come out of the closet with it,” Hancock says. Tweaking the mid-century functionalism of the Jean Prouvé chairs in the dining room, she subtly padded their plywood seats and backs and covered the foam in a punchy raspberry fabric. The chairs surround an antique rosewood table, a Brazilian transplant that Kelly, who does the family’s flowers, likes to accessorize by filling a cylindrical crystal vase with dusty-rose hydrangeas. Or sometimes it’s just armloads of long-stem pink rosebuds from the corner deli. Very New York.

Sitting in one of those pink Prouvé chairs suddenly puts Kelly in mind of an amusing epilogue to this makeover story. The garden’s magnolia, which wasn’t in bloom when landscapers lifted it over the house by crane to command a sunny corner, later turned out to descend from a rare yellow-flowered specimen. In botanical circles, owning such a prize tree is apparently considered quite a coup, but it took the family members some getting-used-to. Kelly received a very polite question by telephone when they happened to be in residence in the spring: “Are you sure you can’t change it to pink”