The House of Tile: Tile of Spain’s Madrid Showhouse

Known to English speakers as Tile of Spain and to Spaniards by the acronym ASCER, the Asociación Española de Fabricantes de Azulejos y Pavimentos Cerámicos didn’t just intend to flaunt the latest wares manufactured by its members when it signed up to participate in last year’s Casa Decor in Madrid. 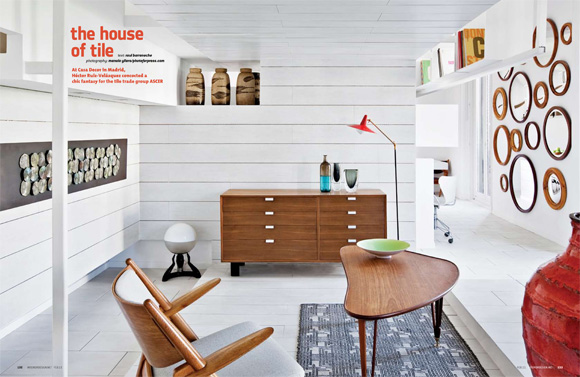 Ceramic tile and flooring do, indeed­, feature prominently throughout the showcase, the attic apartment in a century-old neoclassical building about to be redeveloped. Floors, ceilings, walls, counters, and even cabinets are covered in ceramic, a material with deep roots on the Iberian Peninsula. But Ruiz-Velázquez Architects also used the project as an opportunity to explore ideas for making urban living more efficient. By tightly stacking and nesting spaces and squeezing functionality from every last inch, Héctor Ruiz-Velázquez, was able to pack an entry hall, a living area, an eat-in kitchen, an office, a bedroom, a bathroom, and a powder room into 540 square feet. “If you can’t enlarge the square footage, you can turn to cubic footage,” Ruiz-Velázquez suggests. “Most people don’t take advantage of empty vertical space.” Still, that was no small accomplishment given the 11-foot ceiling, far from double height. His design was part open loft and part jigsaw puzzle, roomy enough for public lectures and 50-person cocktail parties but functional enough for the full-time residents who called this experiment home for Casa Decor’s monthlong duration.

Starting at the entry, stepped platforms formed an L that wrapped two sides of the rectangular space, providing a circulation route past the living area, powder room, office, and kitchen. Straight ahead was the window wall, its three sets of French doors opening to tony Calle de Velázquez—no relation to the architect—and the trees and classical architecture of the Parque del Retiro beyond. In the back of the apartment, steps led up to a multilevel mezzanine that cleverly wedged in a full bathroom, with a tub, and a sleeping loft large enough for a futon, a Barcelona daybed, an Italian 1950’s tripod side table, an iron bench from the same era, and an egg-shape glass lamp that sits on the floor.

“Think of all the places we never use in a house, all the dead space,” Ruiz-Velázquez suggests. “There’s never anything above the fireplace but space to hang a painting. You don’t stand on top of the bed.” Beneath the bed in this apartment, instead of dust bunnies, there was a living area. Constantly stepping up and down, at a variety of levels, created a landscape of activity. Sometimes it resulted in odd juxtapositions, of course. Someone washing his hands in the elevated bathroom, which lacked walls, was visible to dinner guests at the kitchen counter. “Typically, you divide a dwelling in terms of function, statically. There’s no movement,” he says. “Here, angles of vision opened up the apartment to make it feel more spacious than it really was. There was more freedom, more variety. You could explore like a kid in a playground.” The stepped platforms, he adds, increased the sensation.

Of course, befitting ASCER’s mission, the ceramic products that covered virtually every surface­ added their own interest. Most were gres porcelanico, a vitreous material that avoids the slick shininess of old-school glazed ceramic. Instead, textures and tones are stonelike—but the ceramic is less po­rous­, less prone to scratches, and available in larger sizes than stone’s brittleness would allow. The downstairs floor’s 11¾-by-23½-inch rectangles had a rough finish that suggested sandstone. On the walls and ceilings, narrow panels 48 inches long achieved the look of white-painted wooden planks. Wrapping the dining counter in the same panels lent visual continuity to the kitchen. Smaller tiles in the bathrooms resembled brick, and their cabinets also boasted a ceramic surface, thanks to a relatively new product: A laminate ¹/8 inch thick, adhered with silicone, can transform even humble MDF boxes into shiny porcelain blocks.

Installation was equally innovative. With the recently developed “dry” technique, prefab panels arrive with tiles already mounted to fiberboard. Panels are fastened to the subfloor with large steel clips, to the walls with galvanized-steel anchors; ceilings are suspended like acoustical panels. The benefits of the prefab system are many, from time-saving to environmental: no need to cut and set on-site, no mixing buckets of adhesive and grout. In fact, the entire apartment was completed in just 20 days. There’s furthermore no disruption to structures and finishes underneath. And there’s yet another benefit, Ruiz-Velázquez points out: “When you put ceramic tiles in place the traditional way, you have to leave them behind when you move. These, you can take with you.” Or perhaps reuse them for the next showcase.