This interview appeared in Interior Design’s Designwire weekly newsletter. Get it in your inbox now.

Mattia Bonetti follows his own imagination. The Paris-based designer, whose innate curiosities led to an early career working in textiles and photography, came into design stardom after a series of high-profile interiors commissions in the 1970’s and 1980’s. Since then, Bonetti has cemented himself as a force to be reckoned with in the design world. His eclectic furnishings eschew dominant trends in favor of his eclectic visions, surreal and sophisticated in equal measure.

The 5th annual Collective Design, which selected Bonetti as the 2017 Collective Influence Honoree, presented a survey of his furnishings curated by Glenn Adamson. An exhibition of never-before-seen objects at London’s David Gill Gallery, which has represented Bonetti since 1987, will see several of the designer’s famous collections expanded. “He has the unique ability to make something both fabulously whimsical and highly covetable at the same time,” says Francis Sultana, CEO of David Gill Gallery. The exhibition will run from June 7 to July 8. 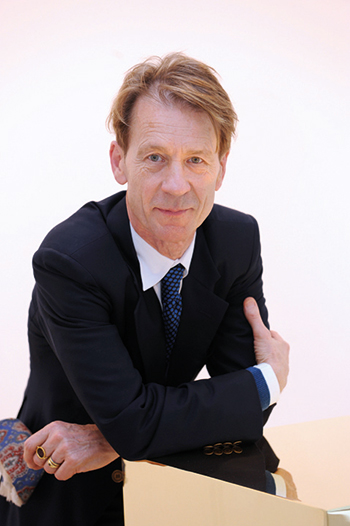 Where did you grow up?

Lugano, a small town in the Italian part of Switzerland. I had a very free, wild childhood where almost everything was permitted. There were no boundaries between the city and the countryside, so I spent most of my time in nature. The town was old and very pretty, with nice buildings, palaces, many gardens, and churches.

How did you first get involved in design?

My parents were antique dealers, so from the very beginning I was aware of objects, shapes, and art. I was trained as a textile designer, which I did for many years, but I eventually wanted to experiment with other materials. That led to a career in art photography—I did many shows, but it wasn’t a huge financial success, so I kept making textiles to support myself. In my late 20’s, I started fabricating a few simple clay objects by hand and started receiving commissions for lamps and other small accessories. I partnered with Élisabeth Garouste, and we were asked to custom design interior décor for a nightclub in Paris called Le Palace, which became one of the world’s most popular nightlife destinations in the late 1970’s.

What early projects influenced your work?

We were really launched forward when Louis Vuitton tapped Christian LaCroix to open a haute couture house in 1987. He commissioned us for everything from A-Z: interiors, branding, packaging, furniture, everything! We finished it all in 3 months. All the decisions were made very quickly, which was a valuable learning experience.

A sheet of paper and a pencil so I can sketch.

My show at London’s David Gill Gallery, which opens in June, will feature lots of new pieces in metal and acrylic. I’m also preparing for a show at Paul Kasmin Gallery in New York, set to open next year. That’s it for now—I only work with an assistant.

What are some benefits of having a small team?

To be constantly in contact with what you make. Even with an assistant, some details escape me. With a big team, you start managing people instead of focusing on the craft. That defeats my purpose of creating. I like being very in touch with what I do.

An item you couldn’t live without?

A radio. I can’t imagine living without music.

Which person, place, or thing—inside the industry or out—inspires you?

Which projects are you most proud of and why?

I’m not proud or nostalgic of any particular project.

View the slideshow to see a selection of Bonetti’s furnishings.