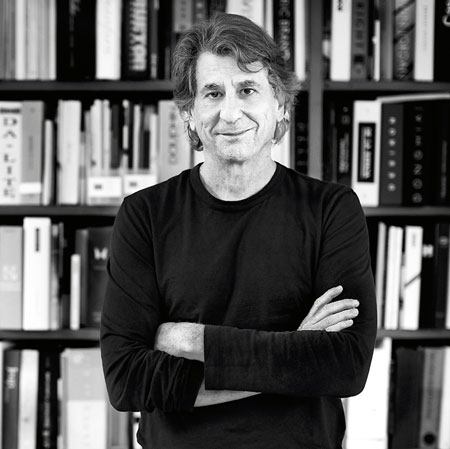 David Rockwell has been spending a lot of time in Madrid lately. That’s for two reasons. Rockwell Group, the architecture and design firm he founded in New York in 1984, now has a satellite office there. The city is also home to Gran Hotel Inglés, the most recent addition to Rockwell Group’s long list of high-profile projects—which also includes Nobu restaurants worldwide, Tony Award–winning set design, and, increasingly, far-flung hospitality projects around the globe.

Built in 1853, the Gran Hotel Inglés was once a hotbed for politicians, artists, and intellectuals. However, years of neglect had left the landmark hotel a relic of its former glory. In June, under Rockwell Group’s deft hands, it reopened, reimagined as a 48-room luxury hotel.

Here, the Interior Design Hall of Fame member reveals some of his favorite spots in Spain’s capital and largest municipality, from his favorite food market to a third-generation bookstore.

Our redesign was inspired by the luxury and sophistication of the present with nods to the famed hotel’s historic past.

Rockwell Group’s Madrid studio have brought back the splendour of Gran Hotel Inglés, Madrid’s oldest hotel through a loving renovation and redesign. The design concept celebrates the hotel’s history and makes it fit for today’s sophisticated traveler. Get in touch for more on this great new #hospitalitydesign project. Photography: Eric Laignel

Near Plaza Mayor, this labyrinth-like market is favored by locals and visitors. The 20th-century iron and glass walled structure offers a unique culinary experience full of fresh Spanish produce, tapas, and wine.

This nonprofit cultural organization, founded in 1880, has stunning rooftop views of Madrid. Just as beautiful is the building’s interior spiral staircase—it allows anyone to make a grand entrance (or exit!).

One of Madrid’s oldest chocolate producers specializes in authentic Spanish churros—a sweet fried-dough pastry they pair with a side of chocolate sauce—served day and night. Hidden down an alleyway, the 19th-century cafe maintains its vintage feel with velvet seating, green-painted wood millwork, and floors of marble tile.

This museum and cultural center is housed in a formerly abandoned electrical station. In 2007, it was renovated by Swiss architecture firm Herzog & de Meuron, who removed the roof and topped the brick structure with two floors clad in rusted iron.

A third-generation bookstore with an amazing collection of rare and antique books, Librería Miguel Miranda is in Barrio de las Letras, Madrid’s Literary Quarter. Home to many writers of the Spanish Golden Age, this neighborhood is defined by its narrow winding streets and outdoor terrace restaurants.

This 400-year-old square has been the scene of markets, bullfights, and football games. It’s a vibrant entry point to explore the old quarter of Madrid, known as El Madrid de los Austrias.

Located next to the Museo Nacional del Prado, the 20-acre park Real Jardín Botánico is a relaxing escape from the city. Founded in 1755, it was later designed by 18th century architects Francesco Sabatini and Juan de Villanueva.

An olive tree grows in the center of this modern tapas restaurant, perfect for a quick lunch or leisurely dinner.

Founded by King Ferdinand VII in 1817, the Teatro Real is one of Europe’s grand opera houses. It’s in a building inaugurated in 1850 that is now a mash-up of architectural styles.