Against the Grain: A Wood-Filled House in Sakai City, Japan

You can almost smell it. Larch plywood so defines this house in Sakai City, near Osaka, that even photographs seem redolent of freshly cut timber. In some ways, the architecture is hardly representative of contemporary Japan. Where is the whitewalled minimalism? Right from conception, Coo Planning principal Akiyoshi Nakao agrees, the interior was meant to be a departure. The emphasis on natural materials, however, is inherently Japanese, and wood is characteristically Osakan. 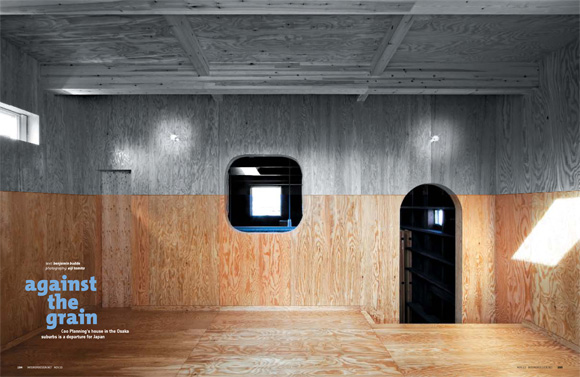 The genesis of the project was also unusual. Nakao writes a travel blog outside of architecture hours, and a certain dentist chanced upon it when he was browsing online. Nakao’s self-described approach to travel is about “not only visiting landmarks but also absorbing atmosphere.” In keeping with that philosophy, the dentist and his wife didn’t hand Nakao a list of specific requirements for a family house, just a general request for a European feeling.

“When I think of an apartment in Europe, I think of the presence of wood, especially the floors,” Nakao says. “Wood is a durable material that takes on more character over time.” For the Sakai City house, almost the entire envelope is wood- walls and ceilings as well as floors. But it’s neither European oak nor Japanese cedar. Instead, he opted for common larch plywood simply sanded, stained, and left exposed. framing a view of trees surrounding a Shinto shrine.

The soaring public space is overlooked by a mezzanine, currently a playroom for the couple’s 3-year-old son. When it’s time for him to have his own bedroom, it can be partitioned from the landing with a set of accordion doors. Another set, perpendicular, can divide that room in half if a younger brother or sister arrives. For the moment, though, the entire family sleeps in the secondstory bedroom.

Connecting the top and bottom levels is the other purpose of the mezzanine. The flight of stairs up to the bedroom is again larch plywood, while the flight down to the public space has open treads of an ash composite, supported by a stringer of gray-painted steel. To unify the two flights, Nakao used the same balustrade for both, plus the mezzanine between: steel pipe painted to match the lower stringer. That gray complements the industrial toughness overall. It’s softened by arched doorways and other rounded cutouts.

Each flight of stairs hugs a sidewall covered, top to bottom, in darkstained shelving. These built-ins bear witness to the family’s bookbuying habit: Walking up and down becomes a figurative journey from Japanese period novels to manga.