How Does Your Garden Grow? Joost Bakker’s Flower-Covered Melbourne House

Flower grower, florist, installation artist, and tireless advocate of sustainable design, Joost Bakker is so well-known in Melbourne that he’s become a first-name-only celebrity. So when he masterminded a pop-up café, bar, and events venue in the Australian city, the aesthetic and environmental bona fides of this head-turning temporary structure were immediately apparent from its name, the Greenhouse by Joost. Made almost entirely of recycled or recyclable materials, primarily steel framing and bales of straw, the Greenhouse was an urban variant on a house he’d already built on a flower farm in the Yarra Valley, 20 miles away, as a home for himself, his wife and colleague, Jennie, and their three daughters. 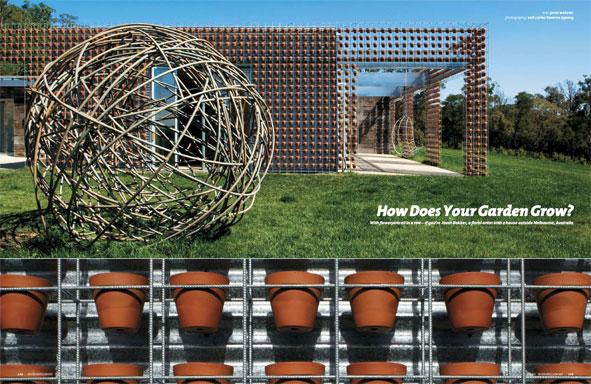 Not that this square, flat-roofed, 7,900-square-foot pavilion looks like a house exactly. Facades are screened by rows of terra-cotta flowerpots—more than 11,000 in all—supported by the steel mesh more commonly used to reinforce concrete. In summer, the pots bloom with strawberries, turning the house into an enormous topiary on an artfully landscaped hillside. “In some ways, Joost’s landscaping is even more extraordinary than the house. It’s beautifully composed with different trees and shrubs lined up at an angle to the dwelling,” architect Brendan Jones says. And he should know: His Antarctica Group consulted on the Greenhouse as well as this house.

Bakker planned and planted the 6-acre site well before he thought about the house he’d construct there. The only architectural certainty was that he’d use a steel frame and straw bales. As a third-generation Dutch flower grower who’d moved to Australia when he was 9, he knew all about straw’s superb insulating properties. “In Holland, they cover the tulip bulbs with straw to stop them from freezing. In Australia, we use it to stop the soil from getting too hot,” he says. “Also, as a kid on my dad’s farm, I loved the way a steel-frame shed could be put up in a few days. I wondered why a house couldn’t be built quickly like that.”

Well, it could. The house, which has a concrete slab foundation, comprises two customized farm sheds flanking an entry courtyard, connected by a wing. “The sheds’ steel frames went up in 10 days. It took another couple of days to load the walls and ceiling with straw bales. Within two weeks, we could lock the place up,” Bakker says proudly. Even more impressive, Jones adds, the densely packed straw “bettered Australia’s energy-efficiency rating system by two or three points.”

Jones’s role as a facilitator included determining the bedrooms’ relation to the bathrooms and the way the kitchen would work with the dining and living areas. But the overall concept and the materials choices belong to Bakker—who essentially treated the project like a floral installation, constantly researching and improvising. “For us, this project was about the process, being able to delight in the creative whirlwind,” Jones says.

Behind the flowerpot screens, the exterior of the house is largely clad in corrugated, galvanized iron. “It’s so easy to recycle,” Bakker enthuses. “Even the zinc coating can be retrieved and reused.” In the entry courtyard and two smaller ones, the walls are hidden behind an impressive swath of 150-year-old planks salvaged from Sydney’s Woolloomooloo wharves.

Bakker’s commitment to recycled or recyclable materials gets a full workout inside, too. Since interior partitions aren’t load-bearing, he could construct them with structurally flawed concrete blocks found abandoned in a field, where they’d acquired a patina of weathering and stains. Only the drywall fails to meet his exacting eco standards. “Magnesium-oxide board wasn’t manufactured yet locally,” he explains. Which is why the ceiling and floor sport expensive Australian plywood rather than a much cheaper but dubiously sourced Chinese import. Cabinetry, shelving, beds, and the front door are made of heavy-duty plywood once used to crate mining equipment. “It’s so beautiful, with branding marks and stenciled numbers all over it,” he says. He adds that many of the house’s plywood surfaces were sealed with store-bought soap, “an old technique from Scandinavia.”

Windows are curtained with untreated mover’s felt, which provides excellent thermal insulation along with a Joseph Beuys vibe. For the living and dining areas, Bakker created cylindrical pendant fixtures by wrapping rusty fencing around halogen bulbs. The entry is dominated by lighting that’s even more extraordinary: A wooden armchair frame bound with leather thongs is screwed, upside down, to the ceiling to become the diffuser for an incandescent fixture.

One of the few furnishings that’s new and store-bought is a club chair sitting in the living area, in front of the double-sided fireplace. “When I asked Jennie to marry me, she said she’d only do it if I threw out the 1970’s sectional that had belonged to my Mum and Dad,” Bakker says with a laugh. “Well, I wasn’t going to do that.” Still, this tomato-red leather-covered chair, a reedition of a 1930 design, seems to have done the trick.