Just north of the Tagus river in Lisbon is the Monument to the Discoveries, a mammoth three-sailed ship in stone. A statue of Prince Henry the Navigator occupies the prow, followed by Vasco da Gama, Ferdinand Magellan, and other explorers from the 15th and 16th centuries. Not far away, the Altis Belém Hotel & Spa pays tribute to Portuguese history in a rather different manner. 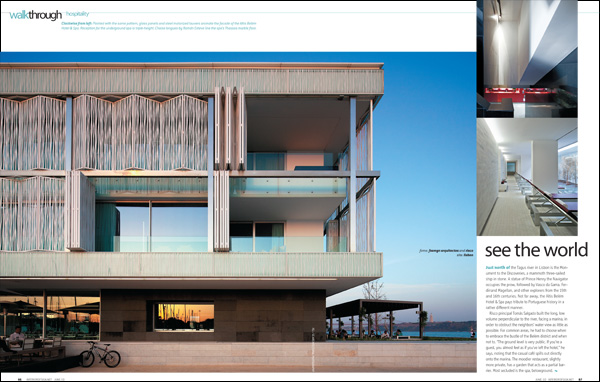 Risco principal Tomás Salgado built the long, low volume perpendicular to the river, facing a marina, in order to obstruct the neighbors’ water view as little as possible. For common areas, he had to choose when to embrace the bustle of the Belém district and when not to. “The ground level is very public. If you’re a guest, you almost feel as if you’ve left the hotel,” he says, noting that the casual café spills out directly onto the marina. The moodier restaurant, slightly more private, has a garden that acts as a partial barrier. Most secluded is the spa, belowground.

While the spa is lined in pale Thassos marble, flooring in other common areas is black granite. Both were chosen by FSSMGN Arquitectos, which handled the interior. “Granite is a stone that belongs to all times and all places of the world,” principal Margarida Grácio Nunes says. Universality gives way to specificity in the 50 guest rooms, where she and principal Fernando Sanchez Salvador used materials and colors to make references to the Age of Exploration. (FSSMGN even worked with a historian on research and development.) Green, navy, and red rugs represent gems or spices from the Asian lands discovered by the Portuguese. And suites have names such as Ceylon, Sumatra, and Macao.