Seventh on Fifth: A Fashionable Upper East Side Apartment By Thomas Phifer

At Barneys New York, Constance Darrow cut her teeth as a fashion buyer. Then she shuttled into executive management for Prada before taking the helm as CEO of Jil Sander USA. Darrow’s life in fashion means that she and her husband, Angelo Lombardi, are constantly back and forth between Milan and New York. 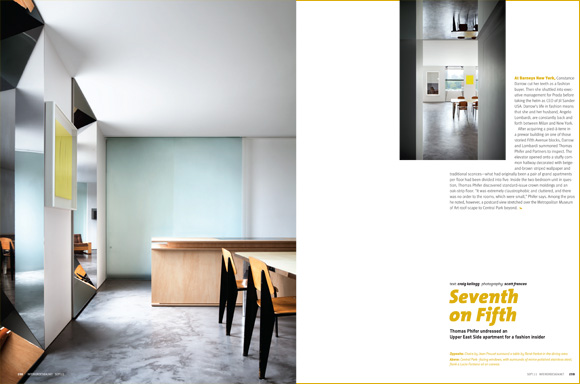 After acquiring a pied-à-terre in a prewar building on one of those storied Fifth Avenue blocks, Darrow and Lombardi summoned Thomas Phifer and Partners to inspect. The elevator opened onto a stuffy common hallway decorated with beige-and-brown striped wallpaper and traditional sconces—what had originally been a pair of grand apartments per floor had been divided into five. Inside the two-bedroom unit in question, Thomas Phifer discovered standard-issue crown moldings and an oak-strip floor. “It was extremely claustrophobic and cluttered, and there was no order to the rooms, which were small,” Phifer says. Among the pros he noted, however, a postcard view stretched over the Metropolitan Museum of Art roof-scape to Central Park beyond.

Soon thereafter, Darrow offered him the job—despite the fact that he had never tackled an apartment before. “I love a challenge,” he says. He and associate Andrew Mazor quickly figured out that the 1,500 square feet, once gutted, afforded plenty of space to lay out a generous one-bedroom. A single large room could com­bine living and dining areas with a kit­chen. The bedroom suite would be big enough for a corner office, a sitting area, and a bathroom, plus there would be a powder room for guests.

With all the trappings of Upper East Side historicist drag stripped away, Phifer naturally gravitated to textbook modernist detailing. A white-painted wood flat panel now hides the prewar front door, and the coat closet in the entry has a matching door. Acid-etched glass conceals the bathrooms; in the kitchen, sliding panels hide the refrigerator, dishwasher, and sink. Most of the time, the kitchen island’s cooktop is invisible under a stainless-steel plate. The island itself is maple-veneered plywood, with edges that remain exposed “to reveal the thickness and integrity of the material,” he says.

In place of the oak floor, he and Mazor poured 2 inches of concrete specially reinforced against cracks. Artisans troweled on a thin topping of a cement compound. “The color of the surface has a lot of abstract variety but never any stylized patterning, so it feels uniform,” Phifer says. A ¼-inch reveal between the floor and the gypsum-board walls makes them seem to float.

Window openings presented a challenge, since they’re undersized by contemporary standards and cannot be enlarged. Thickening the walls allowed­ for a fabulous solution: angled surrounds of mirror-polished stainless steel. Phifer and Mazor researched the optical effects pioneered by minimalist artists. “We looked at Dan Graham, James Turrell, and Robert Irwin­,” Mazor says. In addition, architectural precedents include the faceted window frames of Marcel Breuer’s Whitney Museum of American Art. “It’s hard to live in New York and not think of that,” Phifer says—particularly when it’s just a few blocks away. In search of the perfect angles to “heighten awareness by bringing in animation and experience,” he con­tinues, the architects experimented by holding fragments of mirror up to windows at the office. With the finished installation, he marvels, “You are somehow seeing yellow taxicabs passing below when you’re not even looking down.”

Mirror-polished stainless steel is a Phifer favorite. He also used it for the entry canopy at the North Carolina Museum of Art in Raleigh. For the apartment’s entry—where the ceiling is barely 8 feet high, due to new mechanical equipment—he borrowed his own canopy idea “to explode the room vertically,” he says. Two 4-by-9-foot plates of polished stainless, each 450 pounds, hang from hidden Z-clips. Installers took extra care to minimize the hairline seam between the two plates. At some point in the future, they’ll reflect the artwork that Darrow and Lombardi plan to hang here. For the moment, Phifer says, “It’s pretty powerful with nothing in it.”

A battalion of Agnes Martin drawings is displayed in the living area—in frames once owned by Martin’s fellow arch-minimalist Donald Judd. “Constance would describe her style as simple,” Phifer says. Indeed. When it came time for furniture, Darrow and Lombardi brought in impeccable modern pieces by Jean Prouvé and Jean Royère. But only three of them. In a monastic rebuttal to Fifth Avenue opulence, there is neither a sofa nor a cocktail table. Phifer speculates that you might be able to set a drink on the wide wooden arms of the Royère chairs.