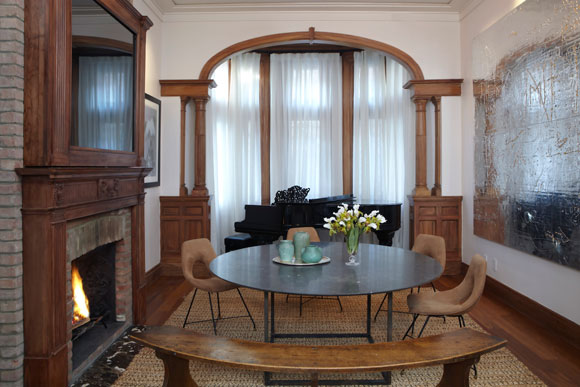 Couri Hay’s home and office in Manhattan. The client asked for loftlike living that would retain the space’s historical quality and feeling of privacy.

A discerning creator of custom spaces with an eco-conscious perspective and an eye trained on luxury, New York’s Campion Platt is the mind behind more than two-decades-worth of beautifully realized architecture and decorating projects. His work includes the residences of celebrities and members of Manhattan high society as well as luxurious retreats in the Hamptons and Palm Beach (his winter home), high-end residential developments, hotel projects, restaurants, and cultural institutions. His entrepreneurial spirit has led him to create spec house projects with developer Joe Farrell of the

; develop a green collection for

and rug design for

; and design two collections of furniture bearing his name. 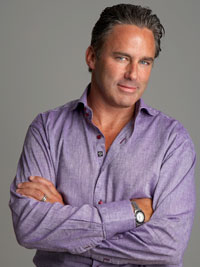 Interior Design: A lot of people talk about designing with “eco-consciousness,” but you’re very devoted to the sustainable architecture movement. Why has this been key for you, and what are some principles you practice and well as preach?

Campion Platt: When working with anyone, I ask what their practices are—be they vendors or artisans. The best solutions are often very simple. For a recent spec house we did out in the Hamptons with Joe Farrell, we brought in some great hemp curtains from a company in California, and used a lot of our own fabric we had in the warehouse. If a client is really interested in telling an eco story, I can certainly do that—and that’s a good back story for them; bringing green to anyone is admirable. All things being equal, I can find something to suit any aesthetic that is green.

One truth that I will admit is that in the world of interior design, there’s not a lot of high-end product to buy that can truly be considered “green,” unless you’re buying antique or second-hand. You can buy totally green houses—and there’s been so much progress made there, particularly in our ability to insulate well, but there’s still not a ton of elevated product that I would necessarily consider green. In that respect, I will say that I’m “green-light.”


ID: As green design has been a big focus for you in projects and as a lecturer, how would you say one can bring a true sense of luxury into green design?

CP: That’s expanding every year. I have spent a lot of time in Asia, and have always had a desire to use organic materials. I think back to six years ago, when green was on everyone’s agenda. Now it’s a standard. Most firms will have an LEED AP architect, and the big contracting companies in New York are certainly on the vanguard of that.


ID: Would you say that “luxury” means something different today that it did five or 10 years ago?

CP: Yes, because pre-2008, 2009, consumption had been spiraling up at such a great rate. Then it dropped down to barely anything. People who took limousines started taking town cars. The people who had the money didn’t want to spend it, because it didn’t look proper. These days, the sense of luxury has migrated from consumption of product to a more eco-conscious sensibility. I also think that time is considered to be more of a quality of luxury than before—the ability to carve out time and do things away from what your iPhone calendar is telling you to do.


ID: Would you say that the desire for items has been replaced by a desire for space?

CP: Space is definitely a luxury concept. I see people wanting to travel more, and the Internet has opened up the ability to get out and explore. Some people thought it would be the opposite, that people would see a video of a place and then not actually go, but I find the opposite to be true. Most of the floor plans I’m working on are much more open than ever before, with the living room connected to kitchen, flowing to the breakfast area. So many of the old “Park Avenue Eights” are being blown out into open and friendlier spaces.


ID: So much of your work is custom, and that brings such value to a project. How does that creative conversation start in relation to your custom work?

CP: The closed world of the decorating business is no more. As decorators, we were the only ones with information and access to so many things. We now have a much more informed client. I’d say that about seventy percent of the work in my practice is custom—the rugs, sofas, lamps, so forth—and that’s been a huge differentiator. Clients want a one-of-a-kind experience, and the ability to customize is a great calling card.


ID: You did a spec house in the Hamptons with developer Joe Farrell. How was that experience for you?

CP: I’ve learned a lot in that process. It was a limited budget, and had 7,000 square feet to do in under in six weeks, soup to nuts. budget, purchasing, camera ready. Given the timing of that project, we were confined to buying everything based on what we saw on the Internet. A part of this test there for me was using the Project Décor e-commerce website, which launched last July. I wanted to see if we could design two of the rooms entirely with product from this website. I think it turned out to be very successful, and it was nice to cut our teeth on it in that way. I think websites of its nature are a big wave of the future.

I had some peers of mine on the high-end side of the business ask me, “Why would you do something like this? Isn’t it lowering your worth?” My first answer is that it was for education, and the second response was that this is where I think the industry is going. At the end of the day, I wound up getting two really great clients from that spec house, who were taken by my aesthetic choices—and that’s what it’s all about for me.


ID: And what kind of dynamic is most satisfying for you with your clients?

CP: That can really run the gamut. Sometimes someone will hand me the keys, say “have fun, I’ll see you in six months, have a great time” and then they come back and love everything. That certainly does happen. Or you can have someone who wants to be totally involved, and attend every meeting. That is enjoyable, because they get to see and understand the time and energy that goes into creating a beautiful space, and we can hash things out together every step of the way. One thing I tend to do is over-inform the clients. I really hate surprises at the end of a project, where something is completed and then we realize there has been some aesthetic disconnect along the way that didn’t get addressed. I want the clients to be very engaged and informed, so I tend to beat them with a stick with information-overload.


ID: What are some of the most satisfying projects currently on your plate?

CP: We’re doing some high-level design work for Embassy Suites, which is a really interesting brand. We’re doing a really fun penthouse project in San Jose, Costa Rica—on the top floor of the best building in the city. We also have a fun house out in Palm Beach, a big house out in the Hamptons, and a couple of great apartment projects in New York City.


ID: How have you come to instigate creative exploration among your teams through the years, and what do you look for when adding to your team?

CP: Because we do both architecture and interior design, we all start out together then wind up splitting off. I’ll begin by presenting a general idea of where I want to go with a project, and then the architect side will go off and do their drafting, while the decorating team will look for their inspiration and develop a budget. I’ll oversee both sides. Then we reconvene and determine what custom elements can be created to make it a really special project. The team is always trying to find something unique in the architecture, and introduce new surprises—it could be on the build side, could be in the upholstery. I like that we work with a sense of community, and keep getting tighter. As for new hires, I am more likely to hire two really creative young people—who can learn quickly and who have fun ideas—than someone more on the senior side.


ID: What were the earliest and strongest influencers on you as a designer and architect?

CP: I went to school in Europe when I was young, and spent a good amount of time in Italy, going around to see architecture. I’ve always been extremely moved by the work of Carlos Scarpa, and he had a huge influence on me in my early years. Recently, I went to Glasgow, Scotland to see the work of Charles Mackintosh, who was so forward for his time. It was incredible to see his designs in 3D. It’s just not the same in 2D. You have to see it for yourself.