10 Qs with Rachel Casanova of Perkins + Will 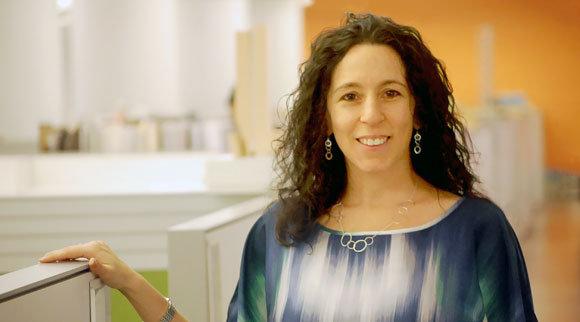 knows how to make corporate environments live and grow alongside their work force. Going beyond issues like square footage and wiring, she helps decision makers take a hard look at their company’s challenges and opportunities, then targets the psychological link between smart design, effectiveness and employee satisfaction. Casanova works tirelessly during the planning stages of office projects, then stays on with clients post move to ensure that employees exploit the new design.

Here, Casanova offers her take on growing a highly effective organization, playing therapist, and why ditching your office is the way to go.


Interior Design: You have a very interesting function at Perkins + Will. How do you get clients to open their minds to new possibilities?

Rachel Casanova: It’s about helping people see design as a tool, as a means to an end, and asking, “What are the purposes that design can end up serving?” There’s an investment to make in good design that will reap benefits beyond beauty. It can influence communication, culture, engagement and satisfaction among people who use the space.

I sit on an alumni board for

, and at a recent event I started talking with a Mohs [skin cancer] surgeon. He was so excited to meet me, because he built his business space based on the

model; its whole environment and commitment to design. He insists that it has changed patients’ feelings about having surgery, and translated into how his employees felt they should be treating people.


ID: Are there some fundamentals to workplace design that you find really can add to or take away from a company’s productivity?

RC: I try to look at the workings of an organization as four “silos”: technology, the human resources, culture and the space. Reaching those four individual areas are very interrelated, and it can lead to discomfort when one is off. It’s really easy for a company to say they want everyone making decisions, but they’re giving everyone who’s a VP and above an office. When that’s the case, how can I, as a junior employee, believe there won’t be a ramification of my making a decision?


ID: How do you like to approach a new project, and what has to be in place to conceive the best plan?

RC: Many times, once there’s a project in the works, it’s often difficult to shift things because someone has designed a schedule and budget already. We want to engage clients as early as we can, when they have a business problem and don’t know what the answer is. Start with a wide net and go in. It’s not like with an engineer who’s trying to tinker and go from a narrow design then out from there. We look for clients who are asking a new question.


ID: Are clients generally receptive to the kind of preliminary analysis of their business culture that uncovers the good and the bad?

RC: The more informed head of real estate recognizes that space has to be connected with workplace strategy. Some companies are very time obsessed, and are nervous about uncovering more issues than they anticipate, but we believe it’s the key to building the right strategy. For example, we were just approached by a consumer product company who said, “You have eight weeks, we need a strategy.” They’d been so overwhelmed and were unsure how to field the problems we were going to uncover. But by the end of two months they were saying, “I get this.” They understood we should take sixty days to explore the strongest solutions, and there wasn’t much risk in our doing so.


ID: What about the work you do in the final portion of a project, to help maximize the effectiveness of a space change?

RC: It’s not enough for the work to be strong until move-in day. I’ve been working on a “change management” program. My feeling is, you can’t change space on people without helping them understand how the solution is helping them and the company. Communicate, educate, and enable people to use the tools. I’ve been working with a large accounting firm for the better part of a year, and it’s helped the settling-in process tremendously.


ID: How did you come to develop your ideas on “change management” in design?

RC: I’ve always wanted to understand the social side of how people will use things and develop their passions. At Cornell, I went to a program called Design and Environmental Analysis, which overlays a social aspect over a science. The fascination for me has always been the social impact to designing space; the relationship of a person to a machine, within a building, and within a cityscape. I did studies on playground design and child development, as well as gerontology, how people get old. The story we’re trying to tell can’t be disconnected from people.


ID: And what about your peers; is everyone on board with the analysis you uncover?

RC: It can be more difficult to speak to colleague than a client. They’ll say, “Don’t ask about those big problems.” I find that insulting… yet, I understand that the industry is programmed contractually. What I look at are business problems that people don’t want to uncover. People say, “I don’t want to know that,” but we can’t ignore them, in my opinion. I’ve gotten very lucky with Perkins + Will. These are people who love difficult problems, and really appreciate big ideas.


ID: What are some current projects underway that presented unique challenges?

RC: One is this consumer products organization that said, “Help us build a business case on why we need to build a better workplace.” That’s a fastball down the middle, in my opinion. It’s a really interesting exploration in New York, where so many of our clients—law firms and banks—deal in intangibles. Then we work with a consumer products company, who have a physical manifestation of what they do.


ID: Do the employees see you as a help during this time?

RC: It’s like being a therapist. The commitment they’ve made to engaging people through communication has really helped, and their commitment to technology has come together. I’ve had to deal with managers who are no longer sitting in offices. It’s an adjustment, taking away that hierarchy response. My father was a high school principal, and I remember—when I was about five—he got a huge desk and his own office. At that age I saw that “bigger was better.” Now we’re telling people that the set-up is less successful. It’s a new way of thinking, but it’s proven.


ID: So does it really boil down to an ego issue?

RC: I used to work at a job where people would see what kind of car you stepped out of, how clean it was, and so on. When you’re in a city and people commute, there’s nothing to make that comparison. People are looking at something to satisfy that ego game, and the office is a manifestation at work of that ego. However, culturally we’re moving past that. This is a new day. It’s about what you’ve done instead of how big your office is.