World nomads who tend to mix business and leisure, Alon Baranowitz and Irene Kronenberg reveal the secret to the success of their high-profile hospitality projects around the globe: They design for people like them. Since founding their office in Tel Aviv in 1999, the husband-and-wife team behind Baranowitz + Kronenberg Architecture have completed a long list of successful restaurant and hotel interiors—among them the W Amsterdam and Mad Fox nightclub in Amsterdam; Zozobra restaurant in Tel Aviv; and, for the Sir Hotels brand, the Sir Joan hotel in Ibiza and Sir Savigny in Berlin. The duo sat down with Interior Design to share more about the ‘bleisure’ phenomenon and hospitality’s community-centric future. 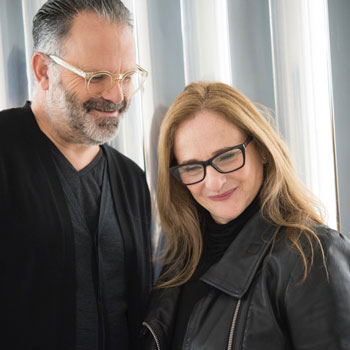 Interior Design: You’ve been quite involved in Sir Hotels, which are now open in Amsterdam, Berlin, Hamburg, and Ibiza. Can you tell us a bit about that?

Alon Baranowitz: We helped develop the Sir Hotels brand, which is, in a way, personifying the hotel. There’s a profile of a guest, and the hotel is designed based on this profile. At the Sir Joan in Ibiza, for example, we thought about conquerors. For some 4,000 years, Ibiza was a target because of its salt, or ‘white gold.’ So we thought, who are the modern-day ‘conquerors’? They are the clubbers who come to the island to have a good time, relax, and leave. That’s how we developed this language of a yacht cabin, with a lot of wood cladding.

Irene Kronenberg: We used materials and textures to express the maritime language. With polished stainless-steel accents you can see the play of light and textures, so walking the corridors is like walking on water.

ID: Can you name a completed project that was particularly important to your firm?

AB: The W Amsterdam and the Away Spa. What is fascinating about the W Amsterdam is that we took two historical landmarks, a former telephone exchange building and a bank, and thought, ‘How can we give them a second life?’ It’s very important to us that the people of the city, when they enter the building, still feel it as a landmark. In the end product, you enter the hotel and smell the history—yet still understand that it’s something totally new, surprising, and fresh.

ID: What are you currently working on?

IK: The W Prague, which will open in 2020. It incorporates part of this amazing historical building, the Grand Europa Hotel. So many things happened there over the years, and we want people to feel that energy. We’re also reviving a historic hotel in Tel Aviv, and, most recently, we completed a new beach restaurant called Chiringuito Blue on Santa Eulalia Beach on Ibiza. It’s part of the W Ibiza, which we also designed and will open later this year.

ID: How do you think the ‘bleisure’ phenomenon—a new buzzword describing a mix of business and pleasure—is changing the hospitality market?

IK: Blurring the boundaries between your work and your life is a reality of our times. This is the way we personally live and, actually, how we like to. But it isn’t just us, this is a general phenomenon. Of course the hotel industry is reacting.

AB: Hotels are changing the way they present themselves. It’s no longer about a place to sleep or eat. It’s about opportunities: to socialize, to feel a little bit secluded and get some work done, to have a meeting with four or five people, or to have a projector available that you can just plug into for a presentation. Hotels are catering to the nomads that are all over the world—living life while working—in both layout planning and interior design.

ID: How do you think hotel rooms have changed over the last few years?

IK: Once the desk was a major feature. Today it’s smaller or gone, and you’re on your bed with a laptop or tablet. No one wants to sit at a desk and look at a wall anymore.

AB: More and more it’s about personal freedom. There are espresso machines in rooms now. So hotel service is changing too.

ID: Do you think hotel design in general is going through a revolution right now?

IK: Now a hotel is not just for the guest, it’s for the community. It’s a building with content—art exhibitions, music, lectures, pop-up stores, and of course parties. Hotels can become places for culture.

ID: What does the future hold for hotel design?

AB: By 2050, 66% of the world population will be living in cities. You’ll start to pick a hotel because of the agenda—the DJ that plays at 12 o’clock that night or the art exhibition. The hotels that would not collaborate in the community or become a piece of the city will not survive.

ID: What’s the secret to a successful hospitality project?

IK: Space design. It’s about people and energy, it’s not about objects.

ID: Can you give a specific example showing this technique in action?

IK: Several years ago, a client came to us and said, ‘We want to you to design a club.’ We had never designed a club. So we signed a contract, bought a ticket to New York, and saw 24 clubs in three days—eight each day, with a sketch book. We didn’t sketch the bars, we sketched circulation. This is how we understood positioning and encounters between people. We came back and knew exactly what to do, and that was the Gorky in Tel Aviv.

ID: Do you use a certain methodology to start a project?

ID: What do you do in your down time?

AB: If we talk about ‘bleisure,’ this is the heart of it. We are really nomads. Last year we spent 150 days away from home. Every hour we have for ourselves, because we do everything together, is business or pleasure.

IK: So we sit at a deserted beach, and look at the sea, and then we think, ‘What about this color blue for the Ibiza project?’