Born in the Italian city of Turin, Paola Navone considers the world her home. Her unwavering commitment to global handicrafts, combined with her mastery of industrial design, has led her to create a joyfully exuberant and unique body of work. Whether her role is architect, interior or industrial designer, art director, curator, or teacher, she draws on diverse cultural influences and celebrates the past and future as much as the present.

, she began her career by studying architecture at the

but soon found herself bored by her birthplace. She headed to Florence after graduation in 1973—a decision that changed her life. It was there that she encountered and worked with Archizoom Associati and Superstudio, precursors of Ettore Sottsass’s Memphis. These groups were starting a revolution, turning their back on the reigning International Style and adding the kick of kitsch. Their iconoclastic point of view had a profound influence on her thinking. 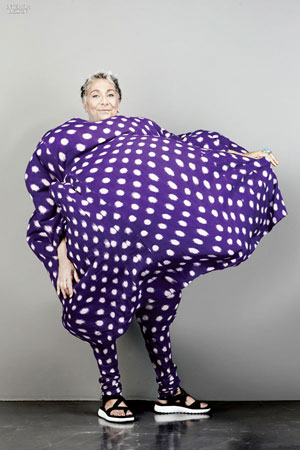 What made an equally great impression was her first trip to Africa, accompanying an ethnologist studying a nomadic people in Cameroon. From Africa, she went east to India, Indonesia, Thailand, Vietnam, Hong Kong, and China, lands that opened the doors of her imagination and ignited a lifelong passion for travel. For her, traveling is never just a pleasure but a necessity. She is a design anthropologist, hunting down objects that have emigrated from one place to another—be it from one  continent to the next or between neighborhoods of the same city. There are even what she calls “micro-journeys,” poking around a friend’s cellar or attic, browsing through a flea market or a factory warehouse full of raw materials, visiting an art museum or Milan’s Salone Internazionale del Mobile.


Returning to Milan after two years abroad, she got a phone call from Alessandro Mendini, who asked her to join his magazine,

She did, immersing herself in editorial endeavors, but she soon returned to design, working for companies such as

. It was with her Mondo collection of charming, handcrafted furniture, lighting, and accessories, launched by Cappellini in 1988, that she stepped into the spotlight on the world stage. Her talent for combining the contrasting styles of East and West to create a global mix made as much of a splash at the Salone as Christian Dior had made in fashion when he introduced his New Look in postwar France.


That spotlight she has never relinquished. From Mondo, she went on to design more furniture and accessories as well as rugs, fabric, and tableware for

, and more. She was chosen to design the very first

collection as well as bath fixtures and fittings for

and Viva and tile for

. She serves as art director for

and the Kieffer division of

. This year, she began to reach a broader U.S. audience with collections for


Meanwhile, her reputation for lively and inventive interiors keeps growing, as she combines objects from all points on the globe—large and small, humble and refined—in a fanciful, appealing way. She has completed residences throughout the world. Her restaurants can be found in Greece, Paris, and of course Milan, where she designed Pane e Acqua as an adjunct to her good friend Rossana Orlandi’s shop. Piazza Sempione hired Navone for its fashion showrooms in Europe, Asia, and the U.S. in addition to a corporate identity.


Did we mention hotels yet? For the

by COMO, Phuket, and the

by COMO, Miami Beach. And she just finished the penthouse bar-lounge at Richard Branson’s soon-to-open Virgin Hotel Chicago. One never knows where her roving eye and talent for transformation are going to surface next.