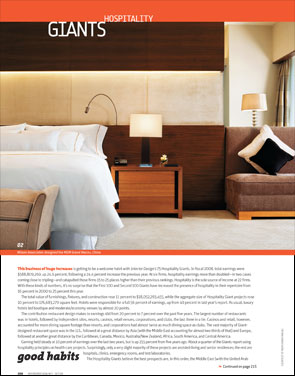 ‘s 75 Hospitality Giants. In fiscal 2008, total earnings were $588,809,269, up 24.6 percent, following a 24.4 percent increase the previous year. At six firms, hospitality earnings more than doubled—in two cases coming close to tripling—and catapulted those firms 15 to 25 places higher than their previous rankings. Hospitality is the sole source of income at 22 firms. With these kinds of numbers, it’s no surprise that the First 100 and Second 100 Giants have increased the presence of hospitality in their repertoire from 16percent in 2000 to 25 percent this year.


The total value of furnishings, fixtures, and construction rose 11 percent to $18,052,293,455, while the aggregate size of Hospitality Giant projects rose 10 percent to 176,683,279 square feet. Hotels were responsible for a full 56 percent of earnings, up from 49 percent in last year’s report. As usual, luxury hotels led boutique and moderate/economy venues by almost 20 points.


The contribution restaurant design makes to earnings slid from 20 percent to 7 percent over the past five years. The largest number of restaurants wasin hotels, followed by independent sites, resorts, casinos, retail venues, corporations, and clubs, the last three in a tie. Casinos and retail, however, accounted for more dining square footage than resorts, and corporations had almost twice as much dining space as clubs. The vast majority of Giant-designed restaurant space was in the U.S., followed at a great distance by Asia (with the Middle East accounting for almost two-thirds of that) and Europe, followed at another great distance by the Caribbean, Canada, Mexico, Australia/New Zealand, Africa, South America, and Central America.


Gaming held steady at 10 percent of earnings over the last two years, but is up 255 percent from five years ago. About a quarter of the Giants report using hospitality principles on health-care projects. Surprisingly, only a very slight majority of these projects are assisted-living and senior residences; the rest are hospitals, clinics, emergency rooms, and test laboratories.


The Hospitality Giants believe the best prospects are, in this order, the Middle East (with the United Arab Emirates accounting for almost two-thirds), China, the U.S. South and West, the Caribbean, and India. About 47 percent of this year’s employees possess hospitality design expertise, and 45 percent of the firms claim all their employees do.


Median salaries across the board are up slightly over last year—not quite 1 percent for principals and partners, 5.8 percent for project managers, and 4 percent for designers. Strangely enough, the bosses received not only the smallest percentage raise, but also the smallest dollar amount raise: $1,250 compared with the project managers’ $5,000 and the designers’ $2,500. Is this democracy in action or what? Median fees produced per employee rose 43 percent over the past five years. This year, hourly rates charged by principals and partners increased 8 percent ($18); rates earned by project managers and designers both rose 3 percent ($5 and $3, respectively).


More than half the time, the Hospitality Giants and their clients have been equally interested in sustainability, and at least 26.6 percent of their projects were green during fiscal 2007-8. Four Hospitality Giants report that all their projects were green, six report that none were, and eight declined to answer the question. During the past year, 30 Hospitality Giants found client decisions to be most influenced by impressive green products that enhanced projects. What’s needed now are the numbers: cost-benefit analyses, green/nongreen cost comparisons, maintenance and up-front costs, case histories, and proof that, given a choice, the public will spend its greenbacks on green venues. In other words, bringon the success stories.

Percentage of Fees by Project Types

New to the 2008 Hospitality Giants

Firms with Most Hospitality Projects Outside the U.S.