What is Authentic Design in the Mobile Workplace? 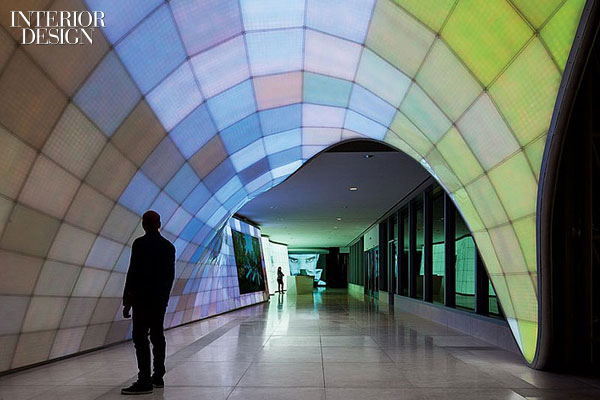 
How can we create spaces for young people that, in the words of Richard Mark of

, “encourage them to interact with each other and not just with technology?” This question kicked off

‘s Principals Roundtable during NeoCon East, part of a series inviting industry leaders to join a select group of peers for a high-profile think tank. The 20 designers and architects in the room realized that clients are craving a particular sense of place—even if they don’t know what exactly that should feel like. So how can designers deliver the unknown,

get paid for it? Here’s the discussion breakdown.

immediately identified how workplace design is crossing over into the hospitality market, and vice versa—the merging of previoulsy distinct markets is picking up speed as people crave “experiences that will travel with them from place to place,” says Daroff. Patricia Sampson of

agreed that, “feeding one industry to the other is just across the board. I was just in a hotel, office, elevator, etc—now all these different elements have to be in one club. The existing structure isn’t going anywhere, but the new mindset has to penetrate that structure.”

#2 The office needs of today’s workers are VERY different


It’s long been apparent that the younger work force has a new set of needs—and designers are targeting them with so-called free address plans for open offices. But at the same time, existing workers are still struggling to adapt to new workplace environments. Elise Shapiro, global workplace manager of

, “manages the design and interacts with the designers as my sweet spot,” she says, speaking from the perspective of global clients. Shapiro shared the challenge of moving people “from a worm-farm facility into a contemporary open office plan… The challenge is to get people flipped to embrace the integration of technology and to disassociate them from their 70-inch-high panels and moving acrylic doors,” she says.

#3 Designing for the unknown

identified the problem of designing for technology that is constantly changing: “We have the reality of brick and mortar, but we don’t know what the technology infrascture will be like by the time the project is built.” Designers agreed: they go into almost every project, and the client is looking for something new that sometimes they can’t articulate. Jim Williamson of


“There is fear of being behind the curve,” says Valerie Hassett of

. “They don’t know where they want to be, but they know they need to be somewhere. They turn to us to create a solution for something that is way behond a physical space. We should be getting a psychologist tab in addition to a design tab! But it’s good that they see us as someone bringing positive cultural changes.” 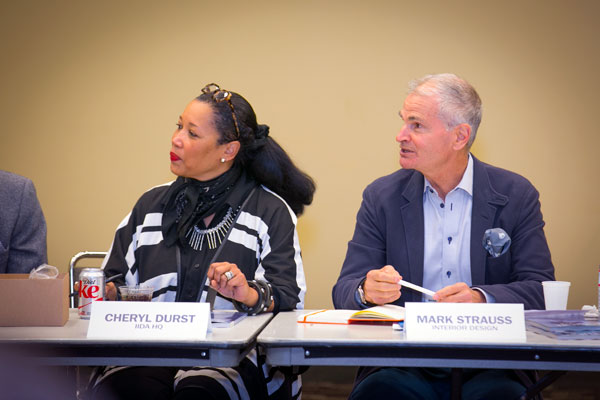 
#4 Craving an authentic sense of place


“The word authentic, you hear it everywhere,” says Barbara Mullenex of

. “It has emotional resonance. Millenials talk a lot about being authenic—but what does that mean for them? It shouldn’t be a LES building plopped down anywhere.”


Jim Camp of Gensler summed up this need for designers to create the warm fuzzies: “People want a sense of place in their projects, even though having a choice of where and how people are going to work is even more important to younger generations.” With the trend towards mobile workstations, how do we feel at home? “We as humans are inherently territorial,” says Durst. “In our mobile world, we still need a place to call our own. How do you accommodate that?’


Sean Wayne of Hickok Cole spoke about the importance of designing to suit the client’s particular culture. For Mullenex, this meant prioritizing the interior finishes for 8,000 housing units in Saudi Arabia: “They really wanted the tactile experience. Right away they wanted to see faucets, sinks, tiles, and the architects were shocked. They are used to coming from tactile interior spaces like mosques.”


Other designers have noticed that a “sense of place” can sometimes take on a very literal, instructional form. For example, reception areas are turning into visitor centers that are curated with the client’s history and legacy, creating an opportunity to tell people a little more about each client and how to use their space.” In sum, a strategic sense of building out spaces is coming up more and more.

#5 Show us the money


If technology is a new huge driver and everyone is trying to figure out where it’s going, does your job have a higher value? As Williamson put it, “They want an Apple iPhone, but at the cost of a piece of paper.” He expressed the room’s frustration that, even though conversations and design strategies are more complex, fees are not rising in turn. Especially when designers save clients millions of dollars by bringing them good consultation.


Daroff argued that, “Salesmanship comes from using all the right buzzwords and selling it as a separate service. Gensler has been doing this for a long time.” Designers report that anything associated not with stamping and designing the drawing is going to be taken from them (for free). Yet they do it to keep clients, especially when facing fierce competition. A loud frustration with brokers bidding designers against each other led to a conversation about RFPs. Daroff says, “When we’re put in that position, sometimes we need to have the strength to walk away. We have to advocate for ourselves and we have to really promote the value of our contribution.”


“If everything is being bid, at least let us write the RFP so that everything is being bid apples for apples,” adds Hassett. “We have to educate them and get ourselves inserted in the process earlier. It shouldn’t be based on how cheaply the client can get it, but on what can the designer can bring to the project.”


Durst brought the conversation back to a positive note: “The pendulum is swinging far and wide in the design world at this point. We collectively have the lead on all of this, we are experiencing the needs every single day. Everyone can see the changing technology—open office versus benching versus an open pantry, etc—yet only we have the knowledge.” That’s what designers can bring to the table each and every time.