has been ahead of the curve since before the launch of

in 2011, when the buzz around contemporary Chinese design began to grow into initiatives like Made in China. Pinwu’s design directors Lei Zhang from China, Christoph John from Germany, and Jovana Zhang (née Bogdanovic) from Serbia first met in 2009 in Milan—Christoph and Lei were studying in the Masters course at

, while Jovana was working for

. At that point, Lei had already founded Pinwu on his own in 2008 with the goal of fusing contemporary design with traditional Chinese crafts. in 2010, Christoph and Jovana made the bold move away from Europe to join Lei’s studio in China, and Jovana went on to become Lei’s partner in marriage as well as business.


Located in the ancient district of Yuhang, which is about 30 minutes the city of Hangzhou by car, the trio have built an impressive network of local craftspeople with whom they work to create a varied design portfolio. Called From Yuhang, the studio’s growing collection of lighting, furniture, and tableware blends European and Chinese influences with contemporary forms and ancient Chinese crafts. “Each one of us puts our own identity into the products and I think you can see that,” says John. “It’s not always easy to combine different visions and ideas but in the end the need to compromise helps to solve problems and makes the design better.” Working out of Pinwu’s workshop space, a small team of local craftsmen create each piece by hand, “We are not looking to work on a big scale,” says John. “The pieces are handmade using delicate processes, we want to keep production authentic.” 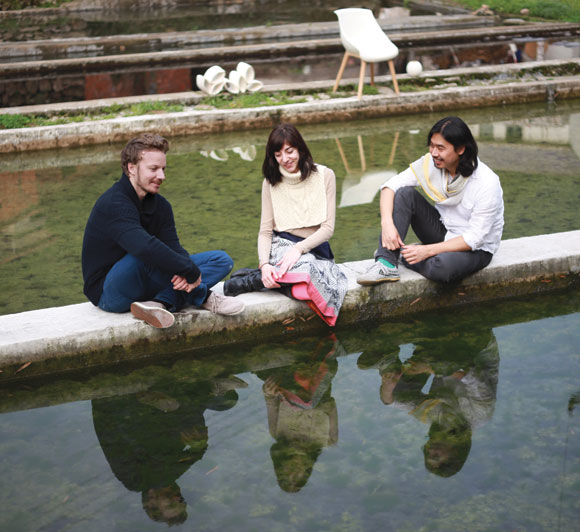 
The studio’s current offerings include the Piao chair made from molded rice paper using the same technique as traditional Chinese umbrellas. Xuán is a lamp made from finely cut strands of bamboo, while a set of porcelain dishes are modeled on the design of the ancient Lì porcelain that has been made in Yuhang since pre-dynastic times. “We are constantly trying to build up stable relationships with the craftspeople. Our aim is not to just take something from their craft to make new designs but to also help them survive and improve, ” explains John. “For example, in the past, the umbrella workshop used to produce many more umbrellas but there is no longer the demand from the public and the production is slowly disappearing.”


This year the studio launched a new project called Rong (?), a word that means “to fuse” in Chinese and references the project’s fusion of contemporary design with traditional crafts. Working with a group of 13 designers from across China and 13 local craftsmen, Pinwu coordinated an exhibition of 18 designs that were created over 120 days working in collaboration with craftspeople in 15 different villages. Exhibited at the Triennale Design Museum during Milan Design Week in 2013 with, the project is ongoing. The studio hopes to create five collections over five years, each one made using a different local material—the 2013 edition had a focus on bamboo crafts in Huangzhou. The designers are currently working with silk for April 2014, which will be followed by porcelain, copper and paper collections.


With interest building in Europe, encouragingly, the studio’s main market is in Asia. John tells us: “It seems that the Chinese people are rediscovering and beginning to appreciate their traditional crafts,” and that can only be a good thing.