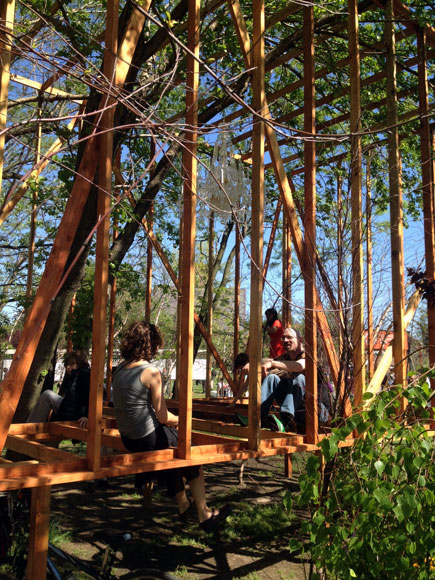 has unveiled the winning commission in the

in Long Island City, New York. Oki was selected from over 150 submissions as the winner by a jury of architects and artists including Michael Arad, Billie Tsien, and Orly Genger. The contest calls on emerging architects and designers to experiment and build large-scale structures that interact with the natural environment of the park.

Oki designed the work with team members Jen Wood and Jared Diganci with Great Expectations Construction building the piece. Titled “Tree wood,” the rigid geometrical frame of Douglas fir 2×4’s stands four feet off the ground and 18 feet high. The structure is carefully placed among a grove of trees at the sculpture park. Curiously, a formal, ornate chandelier, found at a second-hand shop not far from Oki’s studio, hangs from the center. 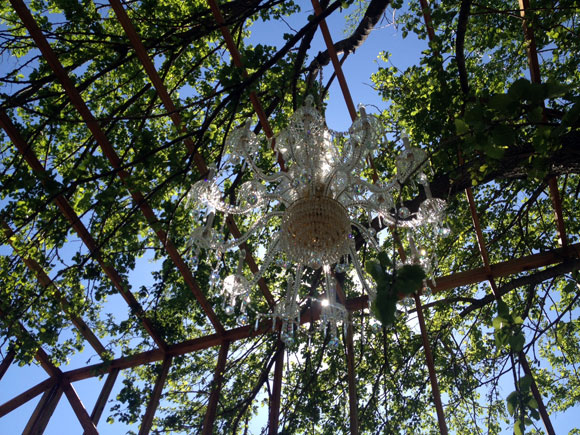 Oki likens the project to many of his other works, saying, “It asks visitors to up their imagination. The project interacts with the landscape to bring a new dimension to it.”

Visitors will question the boundary of interior and exterior. Refined and processed materials from the chandelier to the beams integrate themselves into the organic surroundings of the garden. It makes for an irregular but enjoyable installation, a folly in every sense.