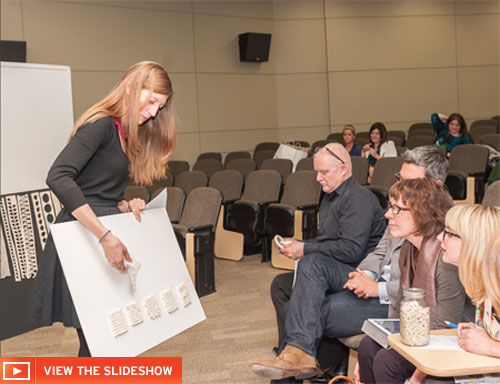 In the end, there could be only one: The thirty Philadelphia University students participating in a

presented their final wall covering projects to a panel of guest jurists at a special buffet dinner event held in Philadelphia. Narrowed to five teams, the graduate-and-undergraduate designers — all of them dressed to the nines — showed off products produced during a semester’s work. Each team was vying for the chance to have their team’s proposal selected for commercial distribution by Weitzner Limited. “It was unbelievable,” says Lori Weitzner, principal of Weitzner LImited, who came down from New York City for the third time following two previous review sessions at PhilaU.  “We were just blown away by the work they did… I felt like a proud mother.”


In keeping with her quasi-maternal role, Weitzner didn’t sit on the final jury. Instead, she tapped Pollack’s Susan Sullivan and Melissa Villa, as well as Josh Thibault and Eric Rymshaw of Philadelphia interiors office

. After brief remarks by Weitzner and PhilaU instructor Mark Sunderland, the teams each gave a professional-style sales pitch. As Weitzner had earlier warned them, “It’s not just about the product —it’s also about the presentation.” “There was so much energy the whole time,” says student Christianna Wincek. She and her team described their idea for an organic wall covering of living moss. The creative idea won honorable mention even though some on the jury expressed reservations about its feasibility as a manufactured product. Gwendolyn Marks, a textile design student and prospective 2013 grad, was a member of another team that pushed the design envelope.

The team’s high-tech wall covering — featuring printed patterns revealed by heat-activated thermochromic ink — elicited some of the evening’s funniest moments with the judges applying the fabric to different parts of their bodies to see how the material reacted. The judges greatly admired the interactive design even if  the students wished they’d had more time to develop the concept. “I think aesthetically ours has a ways to go still,” says Marks. A third team’s idea for a jute-based wall covering was similarly well-received, especially by Weitzner who was “fascinated” by the material’s sound-absorbing properties.  And a fourth group presented an idea for a covering made out of recycled felt – for which Weitzner said she could “see a number of applications.” But the winner of the evening—and of the semester—was a scalloped cork textile from a team of predominantly first-year graduate students, considered the relative underdogs in the program. One team member, Madia Willis, came to the PhilaU program with a fashion background. For her, the semester “definitely opened my view to the possibility that, yeah, perhaps I can do product development for the home market,” not just for clothing. The students weren’t the only ones to learn something from the semester. Weitzner got something she also hadn’t expected: A new perspective on the design process. “I’m a total crazy New Yorker,” says the designer. “I’m always thinking, ‘How’s this gonna be? What’s the end result?’ … I’m not focusing on the process. But the way [the student projects] evolved naturally was great. I learned about stepping back and not being such a controlling person, as I can be in my own design studio.”