Ones to Watch: David Derksen

founded his eponymous Rotterdam-based studio after graduating from the

in 2009 and obtaining his MSc degree in Industrial Design at

exhibition, organized by seven up-and-coming Dutch design studios to have the convivial feeling of a hometown show; most of the designers were friends and colleagues based in Rotterdam and Amsterdam.

Derksen debuted a prototype of his Lightness Table alongside new Wooden Lights and the Dewar Glassware series and Copper Lights. The designer draws inspiration from nature—both its mysteries and its certainties.

“Often I am inspired by science (physics, chemistry, biology, etc.), since these sciences study the principles of our world,” says Derksen. “For me, science, design and art originate from curiosity about our world. Why is a rainbow round and why does it have such beautiful colors?” 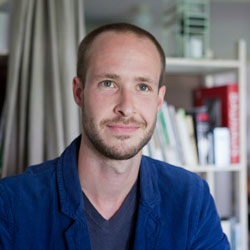 Often Derksen’s pieces take their shape from inspiration on the material level. “The Copper Lights originate from my efforts of trying to make stable shapes from a very thin material,” he says. “Once you find out how a material behaves, the design comes naturally.”

in 2011. The duo were fascinated by antique mirrors with oxidation stains, so they tried to understand the process and replicate it to form designs. “When we found out how we could do that, we just had to think of some good shapes that show the steps in the process,” explains Derksen. “It is almost like showing steps in time.”

in Paris. In his solo work, Derksen continues experimenting with laboratory glassware, working on details of the Dewar series and developing new ideas as he begins to understand each material.

Ones to Watch: Thinkk Studio

Ones to Watch: Acqua Aalta