From Crain’s New York Business : After endless debate over the final location for a performing arts center to be built at Ground Zero, city officials told Crain’s last week that the Frank Gehry -designed theater will be constructed on the originally planned site, and that below-ground construction work on the foundation will start next quarter. 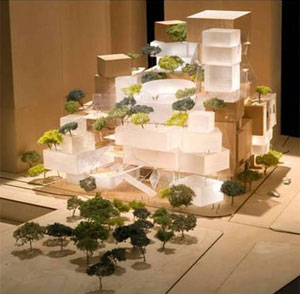 The 1,000-seat theater and rehearsal facility, to be run by the Joyce Theater, a dance presenter, was originally scheduled to open this fall. But disagreements between city and state officials, and the complexity of building at Ground Zero, have kept the project on the back burner.

Now, after much wrangling, the Lower Manhattan Development Corp. has released the $50 million needed to construct the subterranean support structure for the center, which will be built in the area bounded by Fulton, Greenwich, Vesey and Washington streets near the 1,776-foot-high 1 World Trade Center.