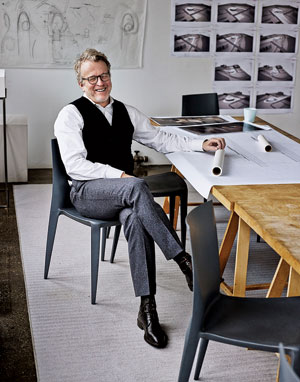 The principal of Allied Works Architecture, frequently tapped for high-profile cultural projects such as the Clyfford Still Museum and New York’s Museum of Arts and Design, designed the just-unveiled National Music Centre, a gargantuan terra-cotta–clad performance and gallery space in Calgary’s East Village. And in the works are other notable commissions, including a U.S. embassy in Mozambique and the Veterans’ Memorial Museum in Columbus, Ohio. Here, Cloepfil—who travels between his firm’s offices in New York and Portland, Oregon—weighs in on his favorite projects and treasured personal objects.

Brad Cloepfil: I grew up in Oregon, where the power of the landscape and the variety of light had a profound influence. The shades of greens and grays are incredible.

ID: Which projects are you most proud of and why?

BC: The National Music Centre is an amazing project. We invented an entirely new music institution, working with the director and board. In the building, we designed [spaces for] silence, a new spatial experience that serves the music and landscape of the northern plains.

On a residential scale, the Dutchess County Guest House is very successful. It binds the site and house together in a profoundly beautiful way. It is just a place I want to be.

I can say the same thing for the Sokol Blosser Winery in Oregon. It is an amplifier of place and landscape.

ID: What’s something interesting you learned about acoustics from designing the National Music Centre?

BC: That sound is magic and acoustics are alchemy. In the complexity of the labyrinthine spaces we create, you cannot totally predict the acoustics. They have a life of their own. It’s always surprising.

BC: All the time, the Louisiana Museum in Denmark, for the collection and the site. Right now, the top floor of the Victoria and Albert museum for all of the decorative arts.

BC: My martini glasses from the Four Seasons in NYC and my garden in Portland.

BC: I have many. To design something spiritual, like a church or a temple. I’m working on two dream commissions now, a restaurant in NYC and a stadium out west.