After earning his Master’s degree in Industrial Design at the Royal College of Arts in London, French designer Nicolas Gwenael headed east to Japan and never looked back. Since then he’s created his own design firm,

, and has helped redefine the shopping experience through his interactive and avant-garde interiors for the likes of Louis Vuitton, Fendi, Yves Saint Laurent, and Shu Uemura, creating boutiques that transport consumers to the next level. Here, Gwenael talks to us about the importance of multimedia in advertising, the design differences Japan and his native France, and what it’s like to launch a perfume. 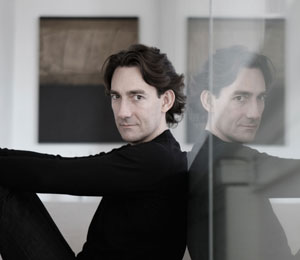 Interior Design: You were born and raised in France. What are some of the design differences between France and Japan?


Nicolas Gwenael: Culturally, France and Japan are quite similar. They both have a rich history and are proud of it, yet the notion of evolution and the dynamic of history are very different in each country. France has a linear approach, like sequences that are clearly defined and unusually influenced by political and economical events. For a new idea to be accepted, it has to take place in a defined typology—it’s a constant evolution. Japan, however, is like a huge spiral that spins constantly. The past is projected into the future, and history is created by layers. The past always remains visible next to the present. The notion of a trend is totally irrelevant as history is created every minute. Previous ideas don’t become irrelevant and out of date, but inspire future ones. So, as a designer working in Japan, any idea can be proposed; it doesn’t have to take place within a defined spectrum or context.

ID: What made you decide to move to Japan after college?


NG: During my studies at the Royal College of Art in London, I met several Japanese designers and architects and was fascinated by their non-contextual approach to design. [Through them I learned that] an idea can exist by itself and can define its own dynamic. In Japan, the reason for an idea never has to be justified, what matters is its potential.

ID: You’ve designed boutiques for some of the largest fashion brands in the world, including Fendi and Louis Vuitton. How has retail design evolved over the years?


NG: I’ve always been fascinated by the world of advertising and how, [in a matter of] seconds, you have to convince, charm, or inspire millions of great ideas. At one time advertising and retail were two different worlds, but thanks to the multimedia wave we’re riding on, they’re now connected. Multimedia needs content—digital and real life. A good example of this is the spike wall I designed for Fendi. When we opened the first shop in Paris, people across the globe were talking about the wall in a matter of seconds [thanks to the Internet].

ID: What are some design trends in retail you’re seeing right now?


NG: When you design a retail concept for a brand, “trend” is not the inspiring factor. It’s too late: What you see has been evaluated a few months or years ago. It takes up to two years to develop and implement and it should last maybe four or five years, so it’s important to capture the dynamic in a longer time frame. The aim is not to create a trend but to present ideas that will inspire others. It’s great to see something copied from one of my boutiques because it means it works.

ID: In the past you’ve compared project design to perfume, in that each has multiple layers or notes. Can you explain this idea further?


NG: The fascinating thing about a perfume is that it relates to your memory, and the images come to mind re-creating your own reality. When you create a perfume, you define the sequences and the different emotions: the first, second, and third notes. Similarly, a project’s design is defined by two fundamentals: space and time. So I identify the different sequences like I would notes. The first note is dynamic and full of surprise, the second is about empathy and discovery, and the final note focuses on intimacy and attachment. [In both perfume and design], you suggest some sort of interaction and let visitors complete the picture with their own expectations and interpretations.

ID: Speaking of perfume, you’ve designed bottles for Shu Uemura, Yves Saint Laurent, and other notable brands. Do you approach smaller-scale projects like these differently?


NG: At the end of the day it’s always the same, it all starts with an idea but the development is totally different. When you design a space, you have no idea what it will look like. Until it’s completed, you have to trust your imagination and the talent of the people you collaborate with. Usually the results exceed my expectations.

ID: What’s the first thing you do when starting a new project?


NG: When I hear about a project, I start immediately, even before the project has been decided. The first impression is very important. Sometimes I force myself to find an idea during the initial conversation with a client. I remember working for Jean-Georges restaurant in Tokyo. I saw the place and studied [chef Jean-Georges Vongerichten’s] creations and how they made me feel. I sketched a mock-up and wanted to share the idea with him before we even discussed the content. There is an intersected logic in every project, so it’s important to capture and give shape to the idea before it dissolves.

ID: Where do you go to get inspiration?

NG: It’s extremely interesting to approach a project beyond the materiality and reality and project yourself in the moment. What’s the purpose and the emotional implication [of a project]? When I started [in the field of design], I was obsessed with making something and building a space, but I think I was missing the purpose and meaning of the subject. Influenced by the Japanese approach, I’m thinking of that moment of encounter when someone will enter a space or use a product, and what emotions and attentions I want to envision.


I have to say that I’m obsessed with things that are floating, transparent, visually intriguing, and/or spinning. Someone once said I have a problem with gravity. I love light and lighting and its power to change and create emotions. Everything is there, so I see visual objects, pictures through a filter, and I capture that feeling to retranslate it in the projects.

ID: What advice would you give to young designers who are just starting out in the industry?


NG: Look around you and find something that speaks to you—a person who inspires you or a company—and study the dynamic of that idea in the past, where it came from, and who initialized it. Read about the person and find an idea that might interest him or her and go present your vision of within his world, not yours. In the word “presentation” there is the term “present.” If you think you shouldn’t give away your ideas, find another job.

ID: What’s one future project that you’re particularly excited about?


NG: We have an amazing project going on in Tokyo right now. Next year, in Ginza [a section of the city], we’re opening a commercial facility and retail space. The building, created by architect Yoshio Taniguchi, will hold retail spaces, restaurants, and more. I’m in charge of the interiors and to help make it a timeless iconic destination for Tokyo, the mecca of retail. I’ll also be launching our new perfume, Curiosity Essence. It will be an amazing glass object—like a drop of water. We created the perfume itself, and it follows the launch of a book of the same name that presents our most recent projects and the influence Japan has on my designs.