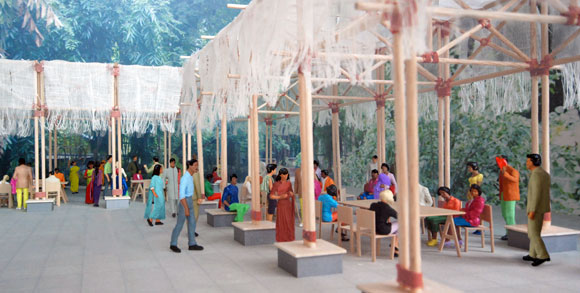 We’ve all heard about its interventions in New York and Berlin – come December, the

will hold court at the

in Mumbai, India. The lab’s free programming will explore the balance between personal and public space in a city home to more than 20 million people.

, the latest plan was inspired by Mumbai’s dense population and modeled after the Indian

, a raised outdoor pavilion traditionally used for public celebrations and events. The main structure will stand in the museum’s gardens and is constructed primarily of native bamboo.

“The new site-specific design subtly celebrates both the simplicity of the former six-column lab architecture and the elegance of the multi-column interiors of our local collaborator, the Dr. Bhau Daji Lad Museum, through a similar, but distinctly local and welcoming 36-column bamboo structure,” says BMW Guggenheim Lab curator David van der Leer. “We are proud to also bring a mobile version of this bamboo lab to a series of distinct locations in neighborhoods around Mumbai.”

Design projects, participatory studies, tours, talks, workshops, film screenings and cultural activities will take place on site at the museum and at “pop-up” locations throughout the city from December 9, 2012 through January 20, 2013.