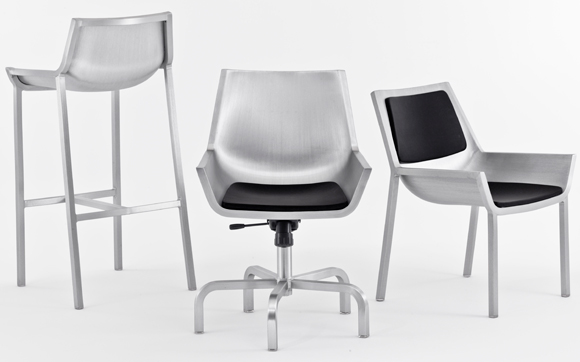 exercised the prerogative of every designer who straddles industrial and interior design—he spec’d his own stuff. And while he thought locally, mining such likely European partners as Boffi and Duravit, he also acted globally, by enlisting Pennsylvanian chair expert

to produce his sleek suite of aluminum seating.


Proving what’s good for the guests is great for the masses, the manufacturer has reproduced the range of chairs and barstools as, what else, the Sezz collection. “The chair is not made to look a certain way, but to make you instantly want to climb up in it and have a nap,” says Pillet. “The idea is to be timeless, to create desires.”

Raw industrial frames containing 88 percent recycled aluminum meet sensually embracing seats in the six-piece line, which consists of a lounge chair, side chair, swivel chair with glides, swivel chair with casters, counter stool, and barstool. “You don’t see the welding, the recycled aluminum, the indestructibleness. They are all real, but invisible values—the hidden territory of a luxury product,” he says.

Each comes standard with hand-brushed finish.

Following its official launch last month at Maison & Objet in Paris, Sezz will make its American debut in “The French Revolution,” a pair of one-night exhibitions that kicks off February 16 at

in San Francisco, then heads down the I-5 to the

in Los Angeles on February 22. In both cities, Pillet’s collection will share the bill with Interior Design Hall of Fame members Philippe Starck and Andrée Putman, whose chairs for Emeco will complete the evening’s Francophilic display.