From the Floor at NeoCon East 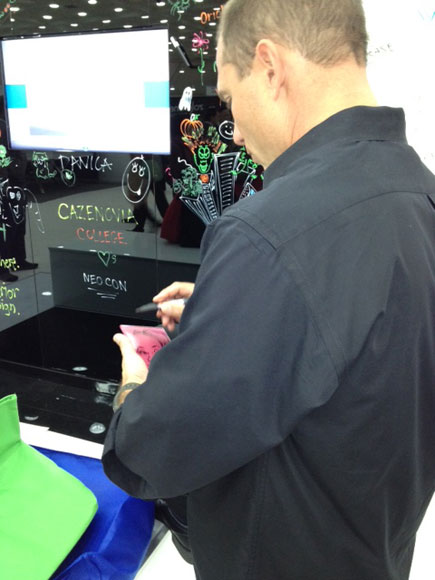 At Clarus Glassboards’ booth, an artist drew caricatures of each visitor on glass samples.


Much of what was shown at

earlier this week in Baltimore, Md, had already debuted in June at its sister show, but several companies did feature a few new items as well as updates on current product. (See slideshow of what was introduced.) The small, but active show featured a range of exhibitors who were happy with the traffic that pulled in mostly mid-Atlantic firms.

“We’ve had a lot of people stop by… and that’s great but let’s see if we get any business,” said Jeremy Rincon, managing partner at Fort Worth, Texas-based

, which did indeed have a line of people waiting to get a free glass sample. The secret: An on-site artist who would draw a caricature of each person on the sample as a keepsake.

Still even without the giveaways or new introductions, many booths were busy and both designers and manufacturers seemed relaxed, upbeat.  Of course, this could also be attributed to the fact that some booths started happy hour at 3 pm.

For those of you looking to schedule next year, NeoCon East will be from October 16-17 in 2013.